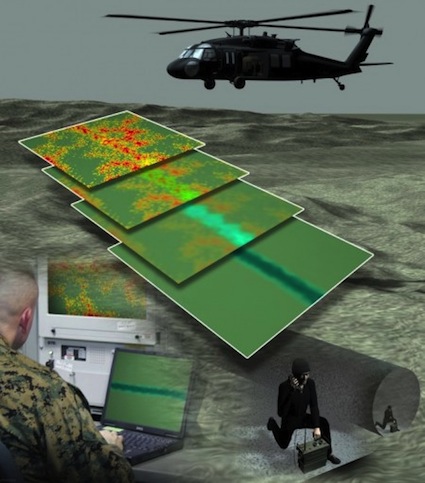 The military could soon be hunting for terror threats using detailed maps of the planet’s subterranean territory — thanks to aerial vehicles that tap into the “anomalous gravity signature[s]” of structures built beneath the earth’s surface.

Lockheed Martin has received a $4.8 million, 12-month contract to create a prototype sensor that spots, categorizes and maps man-made facilities concealed underground. And does it all from the safety of the sky, embedded in a drone and linked to cameras that’d stream the data in real-time.

Pentagon blue sky R&D arm, Darpa, is behind this one. Last year, the agency’s Gravity Anomaly for Tunnel Exposure (GATE) program sought proposals for a system that used a gradiometer to measure miniscule variations in the pull of gravity. Those variations detect differences in the earth’s density, indicating underground space. And the sensors would even be attuned enough to “discriminate a man-made void from naturally-occurring features such as topography and geology,” according to Lockheed’s press release.

“Our expertise in gravity gradiometers will help increase the capability to detect and characterize subterranean tactical threats,” Lockheed’s Dr. James Archibald says. (I assume he’s talking about the guy dressed in black and illustrated above.) “This capability will help prevent both underground infiltration of secure perimeters and tactical underground operations, keeping our assets and troops protected.”

The final product should be able to “detect tunnels [and] offer a mapped outline of their pathways.”

Under DARPA’s Gravity Anomaly for Tunnel Exposure (GATE) program, Lockheed Martin will develop a prototype sensor and system that can detect, classify, and characterize subterranean threats such as tunnels, bunkers, and caches. The sensor system incorporates a gravity gradiometer, an instrument which measures the tiny variations in the pull of gravity. The GATE sensor will detect those variations to discriminate a man-made void from naturally-occurring features such as topography and geology, yielding a near real-time map of what is underground.

Gravity gradiometer systems have historically been used for a variety of applications, including natural resource exploration, navigation, and underground detection. The gravity gradiometer technology measures small differences in the earth’s density. These variations in density yield information on geologic structures, which are indicative hosts of ore bodies or oil and gas deposits, and even voids

Lockheed Martin’s Niagara Falls, NY facility will develop the GATE sensor and system conceptual design under a 12-month Phase 1 contract. DARPA will then decide whether to move on to an 18-month Phase 2 contract to produce a prototype system. For more than three decades, the Gravity Systems team in Niagara Falls has provided the world’s only moving-base gravity gradiometer capabilities. Applications range from defense to commercial markets for hydrocarbon and natural resource exploration.

FAA urges caution in expanding use of unmanned aircraft.