The new LUKE arms were manufactured by Mobius Bionics out of Manchester, N.H. under DARPA’s Revolutionizing Prosthetics program, Here’s how they work, according to the DARPA press release:

The prosthetic system—“LUKE” stands for Life Under Kinetic Evolution, but is also a passing reference to the limb with which Luke Skywalker was endowed in Star Wars: Episode V The Empire Strikes Back—enables extremely dexterous arm and hand movement with grip force feedback through a simple, intuitive control system. The modular, battery-powered limb is of near-natural size and weight. It features a hand that has six user-selectable grips and an arm that allows for simultaneous control of multiple joints using a variety of inputs, including wireless signals generated by innovative sensors worn on the user’s feet.

“The commercial production and availability of these remarkable arms for patients marks a major milestone in the RP program and, most importantly, an opportunity for our wounded warriors to enjoy a major enhancement in their quality of life,” Sanchez said. “And we are not stopping here. In addition to supporting the initial production of these near-natural prostheses, the RP program is continuing to make huge strides in the restoration of upper arm control. Ultimately we envision these limbs providing even greater dexterity and highly refined sensory experiences by connecting them directly to users’ peripheral and central nervous systems.”

DARPA first launched the Revolutionizing Prosthetics program with a goal of developing an advanced electromechanical prosthetic upper limb with near-natural control that would improve quality of life for amputees, the agency says. Less than eight years after starting the program, LUKE arms received FDA approval.

Now, DARPA is set to transfer LUKE arms from an initial production run to Walter Reed for a group of yet-to-be-selected patients. Walter Reed staff will be trained by Mobius Bionics on fitting the bionic arms, as well as service and support. 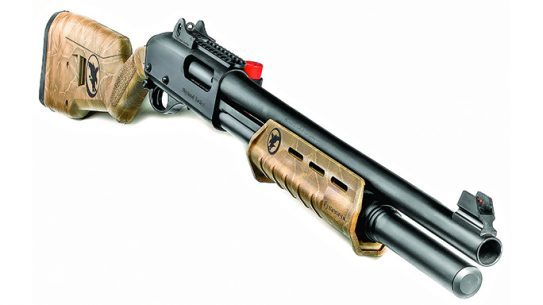 Lay down the law in close quarters with the custom-grade, 12-gauge Nighthawk Overseer Model...