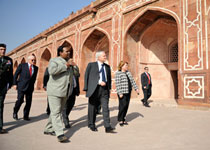 NEW DELHI, Feb. 26, 2008 – Defense Secretary Robert M. Gates landed here today looking to expand on what one official said already is one of the best military-to-military relationships the United States has with any country in the world. This is Gates’ first visit here and one in which he hopes to strengthen the bilateral defense and security relationships that have increased to historic proportions in recent years between the world’s two largest democracies.

“We already have a very ambitious schedule of exchanges and exercises that is growing in size and sophistication. Clearly the defense trade relationship is growing. So I think that there are a numbers of areas where there is potential for cooperation,” the secretary said at a brief news conference before his day of meetings began.

Over the course of the day, Gates is meeting with the country’s ministers of defense and external affairs, its prime minister and members of its parliament.

With India’s full military modernization program under way and billions of dollars at stake, defense trade is key among the secretary’s talking points in his meetings here, a senior DoD official told reporters on background. India last year issued a request for proposals from potential manufacturers for 126 multi-role combat aircraft for its air force. The deal, estimated at about $10 billion, would be the world’s largest single external defense procurement in history, DoD officials believe. Last month, India sent out another request for proposals for 312 helicopters for its air force and army. That deal is expected to be worth about $1 billion.

Also in January, India closed a $1 billion deal with Lockheed Martin for six C-130J Hercules aircraft for its special forces. This deal was a first for the United States and India. Since 1999, India’s military purchases reportedly have been worth $25 billion, and the country is likely to spend another $30 billion by 2012.

“We have tried for some years now to get a seat at the table, and we’re finally there,” the Defense Department official said, adding that Gates will tell officials here that U.S. defense trade offers the “full package.”

“When you go into joint production (and) cooperative development (with the United States), you’re getting not only the best product in the world, but you have the best support system, the best maintenance package over the life of the product,” the official said. “You also have companies that operate with integrity, which is different than what India has seen with other partners in the world. We’re very transparent.”

Some of the details to be talked through are the two countries’ bureaucratic buying and selling processes, the official said.

Another senior official was quick to point out that the meetings are not all about defense procurement.

“We’re just getting into the defense trade business, (but) we have more well-rounded defense relationships with India than any other country,” the official said.

Gates will discuss the future of military-to-military relationships between the United States and India. The two countries already participate annually in one of the world’s largest naval exercises, which involves the navies of five countries and 30 vessels. India had two aircraft carriers in the exercise, and the U.S. Navy had one. Singapore, Australia and Japan also participated.

India’s navy is by far the most capable navy in the region. The country relies on the sea for 90 percent of its oil and natural gas and more than 90 percent of its foreign trade. It has one aircraft carrier, two others on order, 14 submarines and 15 major surface combatants, according to U.S. State Department records. It is capable of projecting power within the Indian Ocean basin and occasionally operates in the South China Sea, the Mediterranean Sea and the Persian Gulf.

The Indian army numbers more than 1.1 million, according to U.S. State Department records. The Army has been heavily committed in the recent past to counterterrorism operations as well as providing aid to civil authorities and assisting in relief operations. Its current modernization program focuses on equipment for combating terror.

The country’s air force also is modernizing its force with new tactics and the acquisition of modern aircraft.

The United States is India’s largest trading partner. Bilateral trade in 2006 was $32 billion, according to the U.S. State Department.