The incident began when a man called 911, saying he was concerned his brother might be suicidal, reported WLWT5. The man said the suspect, identified as Lance Runion, suffered from emotional issues, along with struggles abusing alcohol and pain pills.

A routine wellness check transpired, where deputies attempted to speak with Runion. Then seemingly out of nowhere, the situation turned deadly. Footage shows an arm suddenly thrust out of the doorway. A revolver points directly at Vaught’s head, and a shot rings out.

Deputy Sara Vaught, somehow, someway, manages to duck just in time. She then pulls her own sidearm and engages the threat. She fires several shots, striking the subjects multiple times, reported WLWT5. Vaught, miraculously avoided injury during the firefight.

Authorities took Runion, 56, to to a local hospital for treatment. Police say he remains in critical, but stable condition, reported WLWT5.

Vaught ended up really lucky, and she responded well when a situation turned violent seemingly out of nowhere. The shootout illustrates just how difficult the job law enforcement officers face each and every day. The deputies show up worried for a man’s life. They are there to help him. But in a heartbeat, a troubled soul pulled a gun and threatened everyone around him. It reminds us of the 2018 Lakemoor Police shooting of Kenneth Edwin Martell, who pulled a gun on an officer and nearly killed her before backup arrived.

While there are likely some tactical teaching points here as well, ultimately, Vaught got lucky. But most importantly, she stayed in the fight and lived. 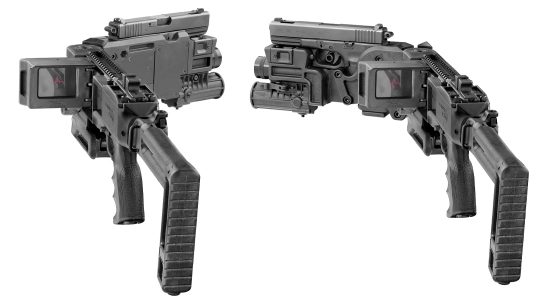