We’re constantly hearing stories about a good guy with a gun. This one’s a little bit different. In the dash cam video above, a good guy with a van—yes, a van—puts an end to a high-speed Detroit police chase by ramming his vehicle into the fleeing suspect’s car.

The Detroit Free Press reports that it all began at around 9:30 p.m. last Friday when a police officer was randomly checking license plates and discovered that the driver of a Chevy Impala on 8 Mile Road in Detroit was wanted on traffic warrants and had multiple license suspensions. When the officer tried to pull the driver over, he took off.

The fleeing motorist led police to nearby Woodward Avenue, where traffic was stopped at a red light, blocking the intersection. Undeterred, the Chevy driver continued on.

“The suspect drove over the sidewalk, across an open area, and back onto Woodward where he fled south on Woodward at speeds of about 80 m.p.h.,” before turning 180 degrees and heading northbound, Ferndale police said in a statement.

According to the Detroit Free Press, the suspect then drove to a bus terminal, then back onto Woodward. When police got closer, the suspect suddenly turned into a shopping center parking lot, which is where the hero of the story comes into play.

The suspect, 26-year-old Kolbe K. Jordan, and his passenger were arrested. In the car, police found 10 bundles of heroin, a loaded handgun and a 30-round magazine.

Jordan has been charged with carrying a concealed weapon, third-degree fleeing and eluding, possession of narcotics and driving with a suspended license, the Detroit Free Press said. As it turns out, Jordan was already on probation for cocaine possession and a weapons charge. Prior to that, he’d already done two years in prison for similar crimes. He’s now in Oakland County Jail after failing to post bond.

The good guy with a van, meanwhile, was uninjured, and his vehicle suffered only minor damage. After speaking with police at the scene, he drove off. Police haven’t released his name and are trying to get in touch with him in order to get his permission to do so.

“While we don’t recommend doing what he did, we’re not in any way going to vilify him,” Ferndale police Sgt. Baron Brown said. “We’re trying to reach him and let him know he did a good thing, but don’t keep doing it because it’s dangerous.” 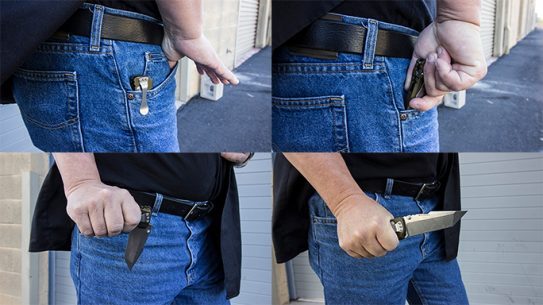 Making a knife a part of your everyday carry selection isn't as easy as...