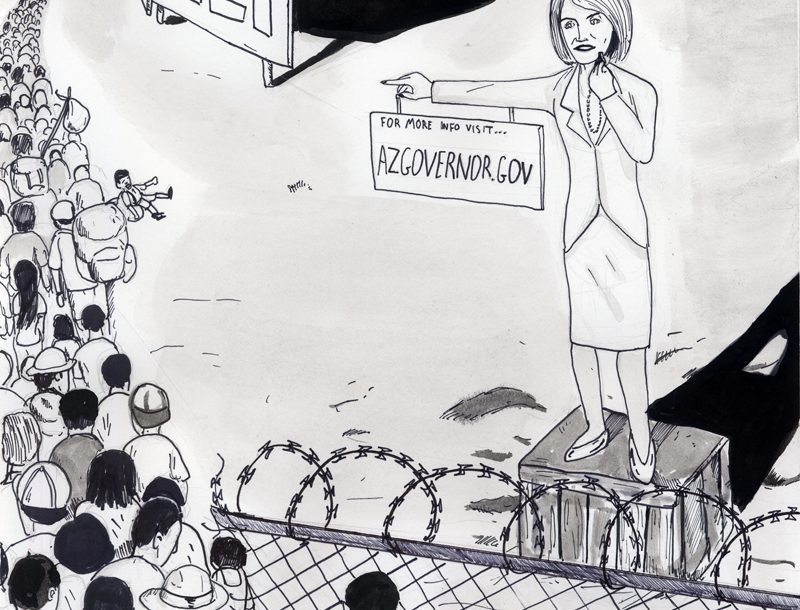 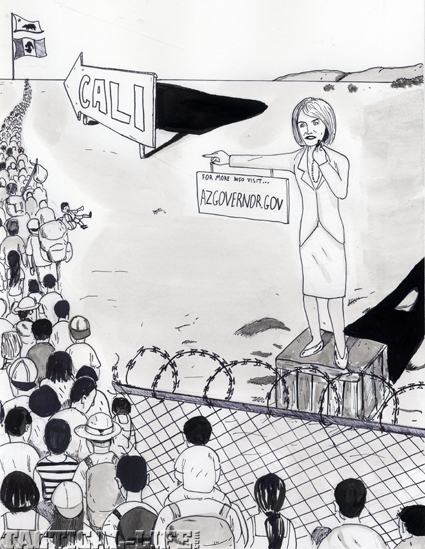 Various groups of elected officials there have decided they are going to boycott Arizona, because Arizona has passed a law that states if an individual’s presence in this country is illegal according to Federal law, then it is also against Arizona law. Hmmm, I wonder if the California boycott also includes the electricity California buys from Arizona? Nobody ever accused the politicos in California of being great Constitutional scholars, but we wonder if anybody there bothered to check what the U.S. Constitution has to say about free trade among the several states, and taxing or restraining—or in this case outright boycotting—such trade.

A fair guess would be that they never bothered to check, as they do not appear to be very good at reading laws, not the Supreme Law of the Land… nor even their own penal code.

California already has a law on the books, more stringent than the one Arizona just passed, that spells out what all California LEOs—no matter from what jurisdiction—are required to do when they arrest an illegal alien. And it has legal consequences for those officials and/or jurisdictions that do not comply.

It does not say such illegals will be issued a California driver’s license: It says they will be turned over to federal authorities, after the State of California has finished their business with the individual. Nor does it say that flaky individual jurisdictions can opt-out of the law and declare themselves “amnesty” cities: It says this is the law, and everybody has to comply with it alike. Gee, what a novel concept!

We couldn’t make up this sort of political comedy, but so you will know we didn’t, below are the texts of the pre-existing California law, and the newer Arizona law. Read them both, and then you decide who’re the knuckleheads here. For all the reading on the topic you want, since you will NOT get it from the network news or large city papers, go on-line and Google “California Penal Code.”

Inspired by Arizona’s new law, legislators in nearly a dozen states are considering new laws they hope will be effective against illegal immigration—and it may be good politics to do so: A new USA Today/Gallup poll shows that 9 out of 10 Americans say it is at least moderately important for the federal government to act this year to secure the borders and stop illegal immigration. Just more than 60 percent say they are very concerned undocumented workers are putting an unfair burden on U.S. schools, hospitals, and social services.

The Arizona measure directs police to question lawful residency only after individuals have been stopped on reasonable suspicion of having violated another law. It directs police to verify residency if suspects are unable to produce documentation. Why is this an outrage? And if their presence in this country is in itself illegal, why shouldn’t our laws apply to them? They apply to you and me, Joe.

Steven A. Camarota, research director for the nonprofit Center for Immigration Studies, noted to Newsmax that requiring identification after a traffic violation is just common sense: without proper identification, a citation is virtually unenforceable, he noted.

For California and Arizona penal code citations click to the next page.

834c. (a) (1) In accordance with federal law and the provisions of
this section, every peace officer, upon arrest and booking or
detention for more than two hours of a known or suspected foreign
national, shall advise the foreign national that he or she has a
right to communicate with an official from the consulate of his or
her country, except as provided in subdivision (d). If the foreign
national chooses to exercise that right, the peace officer shall
notify the pertinent official in his or her agency or department of
the arrest or detention and that the foreign national wants his or
her consulate notified.
(2) The law enforcement official who receives the notification
request pursuant to paragraph (1) shall be guided by his or her
agency’s procedures in conjunction with the Department of State
Guidelines Regarding Foreign Nationals Arrested or Detained in the
United States, and make the appropriate notifications to the consular
officers at the consulate of the arrestee.
(3) The law enforcement official in charge of the custodial
facility where an arrestee subject to this subdivision is located
shall ensure that the arrestee is allowed to communicate with,
correspond with, and be visited by, a consular officer of his or her
country.
(b) The 1963 Vienna Convention on Consular Relations Treaty was
signed by 140 nations, including the United States, which ratified
the agreement in 1969. This treaty guarantees that individuals
arrested or detained in a foreign country must be told by police
“without delay” that they have a right to speak to an official from
their country’s consulate and if an individual chooses to exercise
that right a law enforcement official is required to notify the
consulate.
(c) California law enforcement agencies shall ensure that policy
or procedure and training manuals incorporate language based upon
provisions of the treaty that set forth requirements for handling the
arrest and booking or detention for more than two hours of a foreign
national pursuant to this section prior to December 31, 2000.
(d) Countries requiring mandatory notification under Article 36 of
the Vienna Convention shall be notified as set forth in this section
without regard to an arrested or detained foreign national’s request
to the contrary. Those countries, as identified by the United States
Department of State on July 1, 1999, are as follows:
(1) Antigua and Barbuda.
(2) Armenia.
(3) Azerbaijan.
(4) The Bahamas.
(5) Barbados.
(6) Belarus.
(7) Belize.
(8) Brunei.
(9) Bulgaria.
(10) China.
(11) Costa Rica.
(12) Cyprus.
(13) Czech Republic.
(14) Dominica.
(15) Fiji.
(16) The Gambia.
(17) Georgia.
(18) Ghana.
(19) Grenada.
(20) Guyana.
(21) Hong Kong.
(22) Hungary.
(23) Jamaica.
(24) Kazakhstan.
(25) Kiribati.
(26) Kuwait.
(27) Kyrgyzstan.
(28) Malaysia.
(29) Malta.
(30) Mauritius.
(31) Moldova.
(32) Mongolia.
(33) Nigeria.
(34) Philippines.
(35) Poland (nonpermanent residents only).
(36) Romania.
(37) Russia.
(38) Saint Kitts and Nevis.
(39) Saint Lucia.
(40) Saint Vincent and the Grenadines.
(41) Seychelles.
(42) Sierra Leone.
(43) Singapore.
(44) Slovakia.
(45) Tajikistan.
(46) Tanzania.
(47) Tonga.
(48) Trinidad and Tobago.
(49) Turkmenistan.
(50) Tuvalu.
(51) Ukraine.
(52) United Kingdom.
(53) U.S.S.R.
(54) Uzbekistan.
(55) Zambia.
(56) Zimbabwe.
However, any countries requiring notification that the above list does not identify because the notification requirement became effective after July 1, 1999, shall also be required to be notified.

Arizona says:
(Note: the Arizona SB 1070 is lengthy, as it amends existing statutes. Below is an excerpt: For the full text click here.)

From the State of fruits and nuts, you know, the bankrupt one precariously perched…