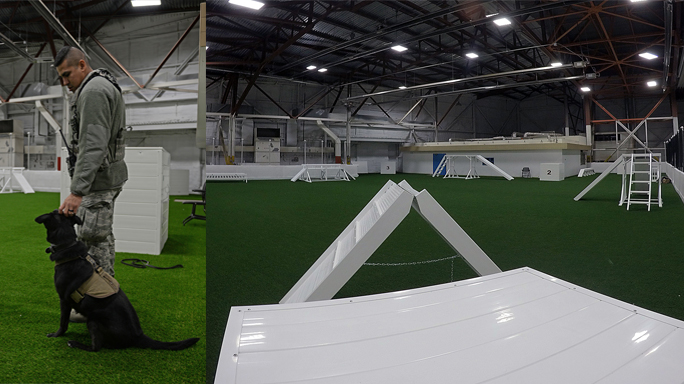 Ellsworth Air Force Base became the first Air Force base in the continental U.S. to have an indoor training facility for its four-legged defenders when it became operational last fall.

The new facility, located in Dock 32, provides an array of features and amenities for 28th Security Forces Squadron military working dog handlers to train their partners and helps reduce the loss of training time due to austere weather.

After seven months of planning and approval, a $100,000 contract was awarded to a local business to complete the Ellsworth renovations that included removing aircraft parts and installing turf, barriers and obstacles to transform the aircraft hangar into a training facility for military working dogs.

“Being at Ellsworth, there is a good chance we can be covered in snow for five months out of the year,” Wheeler said. “The indoor facility allows us to train every day of the year — rain, snow or shine.”

He added that the new facility allows teams to train on a variety of topics ranging from basic obedience training to realistic patrol scenarios.

“The facility minimizes training time lost due to inclement weather,” said Wheeler, who has been a handler for eight years. “It also gives an isolated area for the dogs to work on issues they may have with minimum distractions.”

While the new facility may be slightly smaller than the outdoor area, it still includes the obstacle course, patrol work field and detection training environments.

“My favorite part is how versatile it is,” Wheeler said. “We can do so many things and not worry about hurting one of the dogs due to cold weather.”

Enclosed and heated, the facility also helps the dogs stay healthy and train in a safe environment, Wheeler said.

“We are extremely grateful to be the first base to have an indoor military working dog training facility,” he continued. “(The ability to train inside) benefits the dogs, handlers, and most importantly, the Air Force.” 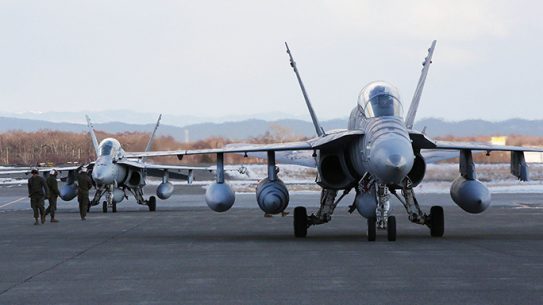