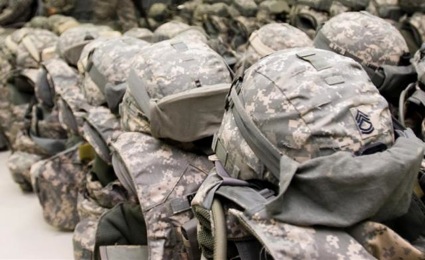 The Army is looking at an improved combat helmet that surpasses the capabilities of what Soldiers are currently wearing in the field, and it may be available in the fall.

“If you hold them in your hand, you’d have a tough time telling the difference, other than the relative thickness,” Cole said during a media roundtable Feb. 2, in the Pentagon. “The ECH is a little bit thicker, also about an ounce to four ounces lighter depending on the size. But it’s really a huge leap ahead forward in terms of head protection capability.”

During testing, he said, the helmets did so well that a new test system will need to be developed to evaluate their effectiveness at protecting a Soldier’s head from fragments.

“The data we’re getting from the prototypes going into the milestone was even better than we hoped,” he said. “We had hoped for a 35-percent improvement over the ACH in terms of ballistic protection and it’s way better than that.”

With smaller fragments, the lab was unable to determine a “V50” rating — that’s a determination of what velocity is needed for 50 percent of fragments to penetrate a test material.

“In this case the test guns they had couldn’t shoot fragments fast enough to penetrate the helmet,” Cole said. “We don’t know exactly what the V50 is, but we know it’s better than anything we’ve seen before. We’re going to have to build stronger test guns to figure out exactly how good it is.”

It’s expected fielding of the ECH will happen this fall and will align with the Army’s Force Generation Model, though Cole said he hopes to accelerate fielding. The Marine Corps is a partner in development of the ECH and will also purchase the helmets.

Image: Army File Photo The Army is looking at an improved combat helmet that…