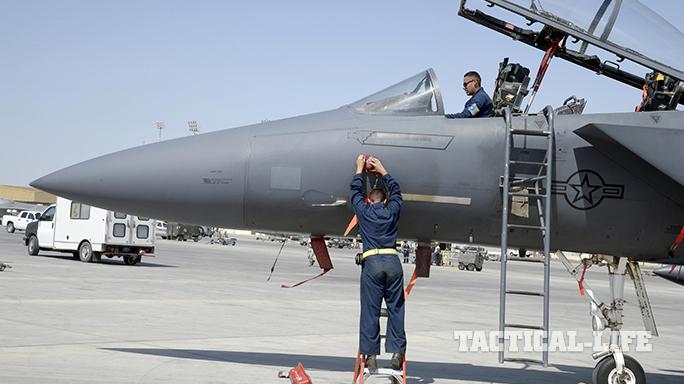 The following is release from Tech. Sgt. Marie Brown and the U.S. Air Force regarding the F-15E and members of the Strike Aircraft Maintenance Unit:

Since November 2014, the Islamic State of Iraq and the Levant (ISIL) has suffered the loss of at least a dozen senior leaders due to coalition airstrikes. Airmen in the Strike Aircraft Maintenance Unit are doing their part to remind the world that arguably no one performs these missions better than the F-15E Strike Eagle.

The F-15E is a dual-role fighter designed to perform air-to-air and air-to-ground missions. An array of avionics and electronics systems gives the F-15E the capability to fight at low altitude, day or night, and in all weather.

“We bring the offensive side to (Operation) Inherent Resolve,” said Master Sgt. Danny, the Strike AMU production superintendent. “We deliver precision guided munitions to Iraq, Syria or anywhere else they need them.”

Strike AMU Airmen are an essential component of ensuring the Strike Eagle’s superior maneuverability and acceleration are ready to take the fight to the enemy.

“We have everyone from avionics to weapons that work together to get the F-15E Strike Eagle in the air,” said Tech. Sgt. Joshua, a Strike AMU electrical and environmental (E&E) craftsman. “Without our systems, the planes don’t fly and the mission doesn’t get accomplished. Everybody here has to work as a team to ensure mission success.”

One of the specialties that help maintain the world famous dual-role fighter is the E&E specialist.

“I maintain and repair all the electrical and environmental systems on the jet,” Joshua said, currently deployed from Seymour Johnson Air Force Base, North Carolina, and a native of Winfield, Alabama. “This includes everything from power generation and distribution to heating and cooling for the aircrew.”

Another specialty that plays an important role in carrying out the mission of Strike AMU is weapons.

“I maintain all the weapon systems on the F-15E Strike Eagle,” said Senior Airman Michael, an aircraft armament system specialist. “I make sure the jets go up armed and ready to fight.”

Fighting is exactly what these jets have done, as they have played a crucial role against ISIL during OIR.

Since Jan. 31, 2015, there have been a combined 8,378 close air support, escort and interdiction sorties flown by U.S. and coalition aircraft in support of OIR. In addition, there have been 8,194 weapons released, making it harder for ISIL to sustain itself as a fighting force.

One particular Strike AMU specialty achieves their sense of satisfaction in no longer seeing their work when the jets return.

“Getting to see the jet come back with no bombs on it is the most rewarding part of my job,” Michael said. “I make sure that when the pilots are ready to drop the bomb, it drops and hits the target like it needs to and gets the job done.”

Coalition airstrikes have thus far engaged approximately 1,500 targets in Iraq, destroying over 1,200 heavy weapons and armored vehicles, which ISIL is unable to indigenously replace. ISIL forces are severely constrained and ISIL leaders are leveraging inclement weather before employing armor and massing forces in an attempt to mitigate airstrikes.

Additionally, coalition airstrikes have degraded ISIL’s capability to seize and hold terrain, reduced the organization’s morale and resources, and created conditions for continued decline and reverting from a conventional to largely guerrilla force.

It takes certain kinds of people to be able make the mission of Strike AMU a success.

“You have to be able to keep a level head,” Michael said. “You have to make sure your head is in the game at all times.”

Having a sense of pride as is important, added Joshua, who has been working on the F-15E for over 12 years. He said Airmen need to believe in what they’re doing out here and have pride in their job to do it right the first time.

The Airmen in Strike AMU are definitely doing what it takes 24/7 to get the job done.

“They do an excellent job of keeping the F-15E Strike Eagle going without getting people hurt,” Danny said. “They want to succeed. If a jet is broken, they are not looking at it like it’s something they can’t fix. They are absolutely in a condition to win.” 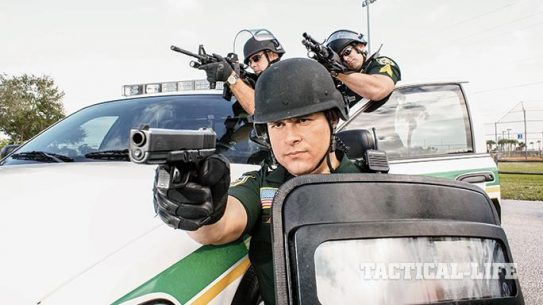 In Florida, GLOCKs rock, arming over 90 percent of the state’s law enforcement officers!