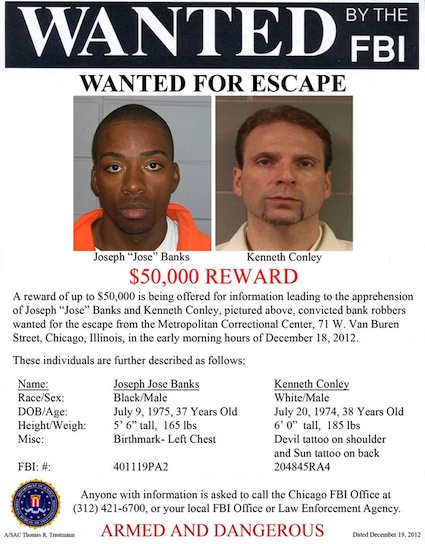 One of the two bank robbers who made a daring escape from a high-rise federal jail in Chicago was arrested after a dayslong manhunt, an FBI spokeswoman said early Friday.

The search continued for Kenneth Conley, who fled the jail with Banks early Tuesday.

Banks, 37, and Conley, 38, somehow broke a large hole into the bottom of a 6-inch wide window of the Metropolitan Correctional Center, dropped a makeshift rope made of bed sheets out and climbed down about 20 stories to the ground.

The escape went unnoticed for hours, with surveillance video from a nearby street showing the two hopping into a cab shortly before 3 a.m. Tuesday. They had changed out of their orange jail-issued jumpsuits.