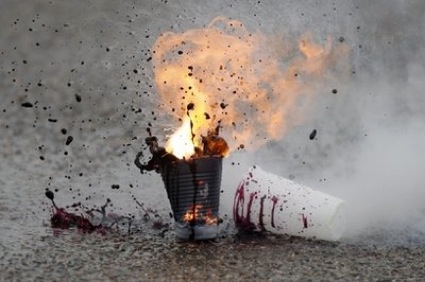 In a Thursday, March 11, 2010 photo, household chemicals ignite during a class for police officers, fire fighters and first-responders on how to identify, disrupt and dismantle IEDs or improvised explosive devices, in Blythe, Ga. (AP Photo/John Bazemore)

If police officers find grainy white powder at a makeshift lab and assume they’ve made a drug bust, they could be making an explosive mistake.
The FBI has been training thousands of law enforcement officials across the nation to identify, disrupt and dismantle improvised explosive devices, including bombs made out of ordinary household products.

The need was underlined this week when federal authorities said they disrupted a suspected plot by a Christian militia to kill police officers with homemade bombs. That follows last year’s alleged plot to make bombs out of beauty supplies and an airline passenger’s alleged attempt on Christmas Day to detonate a bomb hidden in his underwear.

Such devices have been around for years, but they’ve become a greater concern recently not only because of terrorism, but because of the growing availability of dangerous recipes on the Internet.

Local-level bomb experts have been getting three-day courses designed to supplement their training with the latest techniques and strategies. First responders are invited on the third day to learn how to spot an improvised explosives lab.

In one recent class, bomb technicians created a wall of fire by igniting a rope filled with the same kind of explosives found in the airline bombing attempt. They blew to bits a latex glove filled with hot dogs — an attempt to approximate the blast’s effect on a human hand.

“This is stuff that can literally kill you without thinking about it,” said Jeff Haverty, a special agent with the FBI’s Atlanta bureau.

Ordinary materials such as hydrogen peroxide — which is used in hair products — and swimming-pool chemicals can be used to make bombs. There are a host of other easily obtainable products that could be made into explosives that the FBI requested The Associated Press not disclose publicly.

“The average street police officer has some level of training and we want to add to that skill set, a few more things to put in their tool belt,” said Donald Sachtleben, a former FBI bomb tech who now leads the training program. “By talking about it and showing them, we build up their confidence so if they walk into a dangerous situation, they now have more confidence.”

Thousands of first responders at 16 spots around the nation have been trained since 2008. The FBI hopes to reach every U.S. bomb squad over the next two years to combat the growing threat of improvised explosives, Sachtleben said.

In a recent example, authorities say an Denver-area airport shuttle driver, Najibullah Zazi, plotted to bomb the New York subway system with explosives made from beauty supplies. Zazi pleaded guilty in February to conspiring to use weapons of mass destruction and other charges.

And nine suspects tied to a Midwest Christian militia were charged on Monday with conspiring to kill police officers and then plotting to attack a funeral using homemade bombs in hopes of killing more law enforcement officials.

The FBI training focuses on such devices, as well as manufactured chemicals such as PETN, which is used in Hollywood-type explosions and was found in the failed Detroit-bound airliner attack in December.

Authorities allege that Umar Farouk Abdulmutallab assembled an explosive device, including 80 grams of PETN, in the aircraft’s bathroom and planned to detonate it with a syringe of chemicals. Passengers and crew thwarted the attack. Authorities say the Nigerian student has told investigators he received training and instructions from al-Qaida operatives in Yemen.

There are more than 3,000 certified bomb technicians on roughly 475 state and local bomb squads. All civilian bomb techs go through a six-week training program at the federally funded Hazardous Devices School on the Redstone Arsenal in Huntsville, Ala., which is run by the FBI and the U.S. Army.

The additional three-day FBI course is designed to educate officers on the latest threats and techniques used to detect bombs, from test kits to high-tech sniffer devices.

Search planned for unexploded ordnance in Pennsylvanian pre-WWII military base.

In a Thursday, March 11, 2010 photo, household chemicals ignite during a class for…