The members of a new international group formed to help fight the violent MS-13 and 18th Street gangs were meeting for the first time last month at the FBI Academy in Quantico, Virginia when the reason for the group’s existence became perfectly clear: representatives from El Salvador and Mexico realized they had been tracking the activities of the same MS-13 suspect. Now both countries could benefit from their collective intelligence efforts.

“These gangs are transnational, and right now they pretty much cross our borders for criminal activity at will,” said L.T. Chu, an FBI intelligence analyst with our MS-13 National Gang Task Force and the program manager for the new group—the Central American Intelligence Program (CAIP).

The FBI is involved in investigative partnerships to battle transnational gangs, but CAIP, whose members are primarily from Central America, is the first organization to focus exclusively on intelligence.

At the annual Policia Nacional Civil Anti-Gang conference last spring in El Salvador, Chu said, “We determined that one of our weaknesses was exchange of intelligence. We realized that it was crucial that we set up a forum and a mechanism to exchange this information.”

That thinking is very much in keeping with the Bureau’s overall post 9/11 efforts to become a proactive, intelligence-gathering organization that prevents criminal activity rather than responding to crimes after the fact.

A joint initiative of the FBI and the State Department, CAIP consists of veteran criminal intelligence analysts from the U.S., El Salvador, Honduras, Guatemala, Mexico, and Canada who work gang-related matters. Besides intelligence sharing, the objective is to standardize reports and other intelligence products and to minimize the communication gaps between countries—gaps that currently allow gang members to operate across borders.

At its first meeting—the group will meet three times a year at rotating host countries—interpreters assisted participants who spoke little English or Spanish. But even with the language barrier, everyone understands the significance of CAIP’s mission.

“Gangs are a huge problem in Guatemala,” said Heber Ramirez, chief of intelligence analysis for Policia Nacional Civil de Guatemala. Through an interpreter he explained, “It is very important that we have established relationships with these countries so that we can track gang activities across borders.” And as CAIP works toward standardizing how intelligence products are produced, he added, “We will be reporting very specific information in very specific ways that everyone can understand.”

El Salvador is “contaminated” by violent gangs, Funes said, and MS-13 alone has some 15,000 members in the country, including many members in the prison population. “Perhaps the most serious problem with MS-13,” he added, “is that they are constantly recruiting new members.”

“MS-13 and 18th Street are developing constantly and changing their methods,” Chu said. “The only way to fight them is to understand their organizations from the top down. And the only way to accomplish that is through cooperative intelligence sharing across borders. That is why CAIP is so important.” 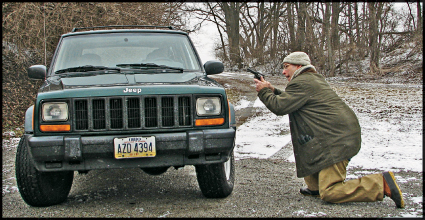