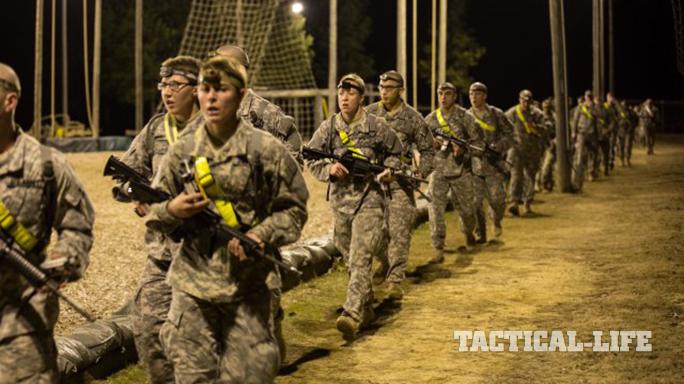 Soldiers cool down after a two-mile run with their assigned weapons, before participating in an obstacle course on Fort Benning, Ga., Feb. 7, 2015, as part of the Ranger Training Assessment Course. The obstacle course is used to determine the students' physical abilities before recommending them to attend the Ranger course.
(Photo by Sgt. Sara Wakai / U.S. Army)
Comment(s)

Of the 100 Soldiers who started this most-recent RTAC, 17 were female. Of the Soldiers who completed the course successfully, 35 were male and one was female, said Maj. Gen. Scott Miller, who spoke during a media roundtable, Feb. 24.

Miller serves as commander of the U.S. Army Maneuver Center of Excellence, at Fort Benning, Georgia. Fort Benning hosts both the RTAC and the Ranger course.

The normal completion rate for the two-week RTAC hovers around 50 percent. This is the second gender-integrated RTAC this year.

The first gender-integrated RTAC course concluded Jan. 30. That course began with 122 Soldiers. Of those Soldiers, 26 were female. Of the Soldiers who completed the course successfully, 53 were male and five were female.

ONE STANDARD FOR ALL

Standard for males and females will continue to be the same as they have always been at both RTAC and the Ranger course, Miller said.

The demanding standards were not bent at all for anyone, and that accounts for the high attrition rates for all Soldiers, who fail for any number of reasons including medical and physical. And for some, the stress is just too great and they opt out, he said — male as well as female.

Helping to ensure that the standards remained the same for all participants were 17 enlisted and eight commissioned “observer-advisors,” or O-As, said to Sgt. 1st Class Tiffany Easter, an O-A.

An additional duty of the O-A was to advise Ranger instructors, she said, since in years past there had never been female students. Some of the advice was on sleep arrangements, latrines, and so on.

In Easter’s case, she had embedded with Special Forces Soldiers on culture support teams in remote areas of Afghanistan last year.

For her part, Easter hopes to one day attend the RTAC and then go on to the Ranger course, but for now, she said, it is more important that she helps ensure the gender integration is successful and that standards are upheld for everyone.

“That’s noteworthy and commendable,” he said. They saw the “intrinsic value of the training” and will return to their units as better Soldiers.

“Anytime Soldiers raise their hands and volunteer for a tough course, I admire that,” Miller said. “And this is about the toughest course the Army has. The operating force will receive more well-trained Soldiers because of this experience.” 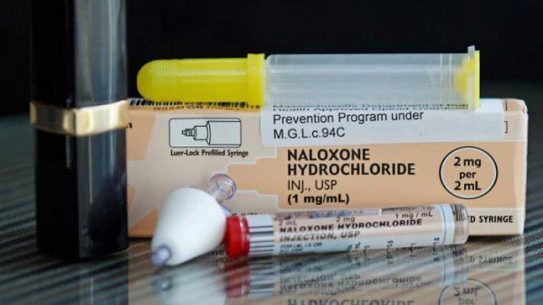 Narcan is a spray that law enforcement officers can use to block opioid receptors...