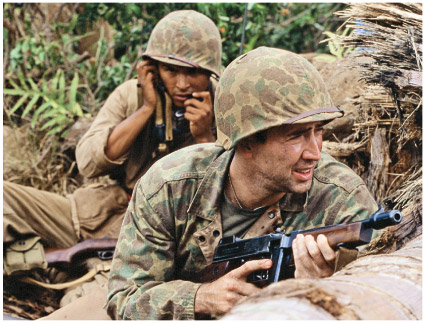 “MP Captains don’t have goatees!”
“Wasn’t there anyone involved with the film who knew anything about the (fill in the blank: military? Firearms? Police work?)” Well, yeah, in most big budget film and television projects, they do hire actual Military Advisors. Only it’s one thing to know what to do, and another thing to actually do it. For example, the quote above (from one of my favorite internet reviewers) deals with the issue that the MP Captain in Murder At The Presidio, played by the wonderful actor Eugene (lead zombie in Land Of The Dead) Clarke, should not have had a goatee. That’s right. Actual MP Captains are not allowed to sport a goatee. Only Clarke was going from his work on our film back to the Broadway show, The Lion King, where the goatee was necessary. His agent would not allow him to shave. So even though every Military Advisor and even the Director knew it was wrong, it had to be that way.

T/A’s: Hired To Be Ignored!
The job of a Military or Police technical advisor (T/A) begins as soon as there is a script. The T/A will take the scenes apart for inaccuracies in terminology and procedure. This sometimes presents ideas for new scenes or dialogue to clarify problem points. Once in pre-production, the T/A often gets involved with the departments that procure costumes, vehicles and weapons.

Why, after all that care and hiring a T/A, would a captain’s bars be upside down, or a soldier be wearing the wrong cover or carrying the wrong weapon? Simple: Film making is messy! Things change when you get to the actual location and find out there’s NO RIVER for them to cross. In a way, it’s like combat. All the planning in the world, but on the day hundreds of people are trying to work in cooperation – and things fall through the cracks, like extras showing up with shiny Timex wrist watches in Civil War movies. As hard as they try, they can’t catch everything. On day’s when shooting is as accurate as possible, sound effects and dialogue are added maybe months after the T/A is gone and poor schmucks like me are forced to write cockpit dialogue for Blackhawk drivers on the spot, with imaginary call letters and imaginary protocols.

DoD Rules!
When a project’s subject matter concerns the U.S. Military, and especially depicting an historical event, the film company will often contact the DoD for help. The DoD maintains an office for all branches of the armed forces in Hollywood to deal with film and TV requests. These folks not only make sure that you are not fudging the facts, but they must be satisfied as to your seriousness if you wish to use any actual U.S. Military bases or material in the film. The road to gain DoD approval for assistance in a film, television or media project is long and arduous, but worth it in the long run. A film doesn’t actually rent from the military, but gets tasked equipment, personnel, and facilities as long as they do not interfere with the operational tempo of the affected units. The individual units are reimbursed by the production for all costs associated so that the taxpayers carry none of the burden. These military project officers are assigned and go through a vetting process for the script and actually command any real troops on set. DoD gets pre-screening approval of the finished product to ensure that no mistakes were made in the portrayal of the military in the edit. The general criteria for script approval is that while a film does not necessarily have to show the military in a good light, the representation must be true and according to regulations and the UCMJ.

But most films don’t see Military accuracy as that important and therefore do not seek DoD support, they will dress and equip their actors solely from the civilian sector. Dramatically, it may sometimes be necessary for recruits to have what would normally be prohibited contact with their officers (think of Richard Gere Kung Fu fighting with his DI in Officer And A Gentleman) in order to tell the story the filmmakers are writing. At times like that, T/As have to reassure themselves by thinking of just how bad the finished product would be if they weren’t there at all. A movie is only a few hours long, unless you’re making a sprawling epic like A Bridge Too Far, events which took place over months must be compressed into seeming like days, to keep the drama moving. Such conflation requires combining characters, even making up characters.

And it’s not just T/As that can be called into action. “There must not have been any technical advice from the National Park Service, National Interagency Fire Center, or any legitimate wild land fire fighting organization.” That’s from one of my favorite reviews of the fire docu-drama, Firestorm, Last Stand At Yellowstone. This was made for A&E, sticklers for historical accuracy. The T/A, Rocky Barker, was the man who wrote the book (literally) on the real blaze we were dramatizing, the man who’d been there fighting it on the ground, and he read every draft of the script, and fixed every technical error.

And you know what? A boatload of factual errors got into the film.

Cop shows like NYPD Blue and The Shield, which have current and former police officers on their staffs, but feature Detectives regularly physically abusing witnesses and coercing confessions! Stephen Downing, a former LAPD Chief who has moved into television production (Robocop, F/X The series) shakes his head at that, “It’s the kind of stuff we would have been thrown off the force for in real life.”

“Run, You Maggots!”
That’s not basic training, that’s actor training. Dale Dye is one of Hollywood’s most famous T/As with credits that stretch from Platoon and Saving Private Ryan to historical pieces like Last Of The Mohicans and Sci-fi extravaganzas like Starship Troopers. If there’s Actor-Soldiers to be trained, Military savvy directors like John Milius take the T/A role one step further and hire Dye to put the cast through “Boot Camp,” an intense training period that will include firearms and back-breaking PT. Dye believes that even these abbreviated versions of military training help impart a sense of realism in the actors. And now Dye has a taste for the other side of the camera as he has been seen recently as a “Straight” actor in TV’s Commander In Chief and the movie Mission Impossible.

No stranger to the readers of these pages, Gunny, R. Lee Ermey began his Hollywood career as a military advisor on Francis Ford Coppola’s Apocalypse Now, then doubled up as T/A and on-screen drill instructor in the classic Full Metal Jacket. Their military backgrounds don’t stop these men from appearing in purely entertaining films like Toy Story and Sgt. Bilko, where the military accuracy is not the first priority.

Yes, in spite of the glitz and the glamour, the Film T/A’s job is a thankless one. He stands on the set waiting for the crew to screw up, and then jumps in with a correction to an egregious error in tactics or protocol, only to have the director shoot them down for “creative reasons.” 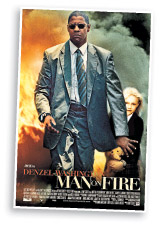 Bad Hollywood
Man on Fire: We’ve seen it a million times since films got audio, the hero hands a gun to his companion and says, “Cover me.” That flew 50 years ago, when most Americans were familiar with the operation of firearms, but in today’s lawyer driven-society, it’s less likely that the man on the street knows which end of the gun to point at the bad guy.

In Tony Scott’s 2004 Man on Fire, former Operator Creasy, portrayed by Denzel Washington, displays some pretty egregious gun handling. In shootouts with the bad guys, his bullets miraculously hit the mark even when he isn’t using his sights, and in the finale, he hands a gun to the kidnapped child’s untrained mother (the fashion model-looking Rhada Mitchell) and asks her to “shoot” the bad guy if the hostage exchange goes bad! Yikes! He’s lucky she didn’t shoot him in the ass!

Good Hollywood
Mission Impossible III: In last summer’s mega hit, superstar Tom Cruise as IMF agent Ethan Hunt, has to have his doctor-girlfriend (played by Michelle Monaghan) “kill him” to disarm an explosive charge in his skull. In case the bad guys reappear before she can revive him, she’ll have to protect herself with his Beretta 92 9mm, and so the bleeding, battered Cruise gives her a quick, but accurate class in loading, aiming firing, and reloading the semi-auto pistol. This few minutes of attention to detail makes it cooler when she actually has to fire the gun, kills the bad guys and even does a tactical reload, burying Man on Fire for Hollywood gunplay.

TW Notes: Tactical Weapons wants to make it clear, that this featured column, ‘Bad Hollywood’, is not intended to disparage those in media who work diligently to provide great entertainment. This column was conceived from decades worth of letters and comments poking fun at inaccuracies in movies, TV, books, video games and such. It’s our goal to share findings, whether good or bad, with our readers.
We appreciate the media’s commitment and hard work.

“MP Captains don’t have goatees!” “Wasn’t there anyone involved with the film who knew…