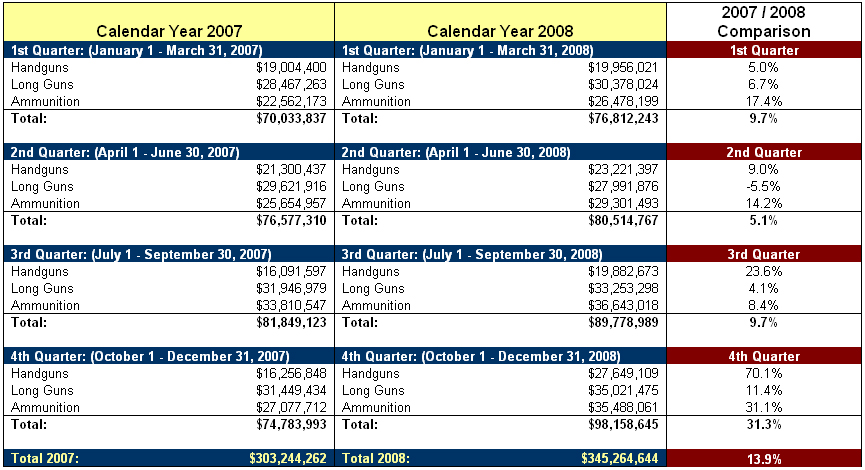 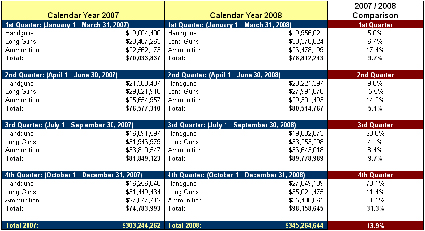 NEWTOWN, Conn. — During a time period of great economic uncertainty, firearm and ammunition sales have continued to increase throughout the country.

According to the most recent Firearms and Ammunition Excise Tax Collection Report, released earlier today by the Department of the Treasury, firearm and ammunition manufacturers paid more than $98.1 million in the fourth calendar quarter of 2008, up 31.3% over the same time period reported in 2007.

“Demand for firearms and ammunition is clear,” said NSSF President Steve Sanetti. “Since the November elections we’ve seen an increase in firearm ownership coupled with an unprecedented level of attendance at firearm safety courses nationwide. Americans are buying firearms, and they’re taking the proper precautions to ensure that they exercise their individual Second Amendment rights safely and responsibly.”

Translation to Sales:
Using the latest collections as an indication of sales, a projection of $917.5 million was generated in the fourth quarter (calendar year) of 2008. Please keep in mind that although excise taxes are one of the best indicators of industry performance, they only report what the manufacturers paid in taxes and do NOT reflect retail mark-up and final retail sales. Furthermore, these figures are based solely on U.S. civilian sales and do not include sales to military, police and other governmental agencies.

Total estimation for the quarter: $917.5 million

“These numbers speak to a much greater story,” said NSSF Senior Vice President and General Counsel Lawrence G. Keane. “America’s gun owners have serious concerns about the country’s current political make-up. Lawmakers should recognize this and understand that these gun owners are not merely consumers buying a product, but voters reacting to a very real threat.”

NEWTOWN, Conn. -- During a time period of great economic uncertainty, firearm and ammunition…