NEWTOWN, Conn.—The National Shooting Sports Foundation strongly encourages the National Park Service to reconsider its policy banning the use of traditional ammunition made with lead components on park lands and points out that neither humans, wildlife populations nor the environment are harmed by the use of such ammunition.

“The National Park Service’s decision is arbitrary, over-reactive and not based on science,” said Steve Sanetti, president of the National Shooting Sports Foundation, trade association for the firearms and ammunition industry. “Studies show that traditional ammunition does not pose a health risk to humans, or wildlife populations as a whole.”

The park service appears to have made its decision without requesting input from wildlife management and conservation groups, or ammunition manufacturers. “There is no evidence of traditional ammunition harming humans or wildlife populations that would warrant this kind of drastic policy change,” said Lawrence G. Keane, NSSF senior vice president and general counsel.

Hunting is allowed in some national parks in order to reduce herd populations or remove wounded or sick animals, and NSSF maintains that traditional ammunition is best suited for these tasks. Traditional ammunition costs less, and hunters are more familiar with its performance. Hunters also are agreeable to taking voluntary measures, such as burying entrails after field dressing game, to prevent scavengers from ingesting lead fragments.

Maintaining healthy wildlife populations has always been a priority for hunters, who have contributed approximately $5.6 billion to protect wildlife and habit over the past 70 years through excise taxes paid on firearms and ammunition.

Ammunition containing lead components has been the choice of hunters for well over 100 years, during which time wildlife populations in America have surged. While lead ingestion appears to occur in a small number of individual animals, overall populations are unaffected. Also, there has never been a documented case of lead poisoning among humans who have eaten game taken with traditional ammunition, and a recent Centers for Disease Control and Prevention study on North Dakota hunters who consumed game confirmed that there was no reason for concern over eating game taken with traditional ammunition.

Unfortunately, the park service’s decision to ban traditional ammunition adds to the misinformation being circulated by anti-hunting groups to promote fear among wildlife managers and hunters about traditional ammunition. The park service’s news release makes erroneous comparisons between organic lead found in gasoline and the metallic lead used in ammunition. Banning lead in gasoline and paint was related to public health concerns because of the widespread nature of these substances and ingestion of paint chips by young children. These issues are not associated with lead in ammunition.

NSSF and its member companies who possess significant knowledge about lead and its use in ammunition hope to be part of any regulatory process to encourage the park service to reconsider this hastily concluded policy before it goes into effect by the end of 2010. 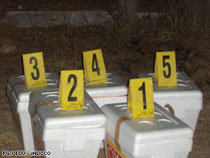