Flagstaff Police released body cam video of a shootout with a man in a Walmart parking lot a couple of weeks ago. Check out the intense clip—which combines footage from the three officers present—above.

A statement from the department says Officers Pat Condon, Dustin Hemp, and Ryan Sherf were called to the parking lot at around 9:48 p.m. on Oct. 12 after the suspect—29-year-old Sean D. Brady—was spotted brandishing a weapon. The Arizona Daily Sun reports that Brady had been playing loud music in his pickup truck when people who were sleeping in the area asked him to turn down the volume, at which point he showed the gun.

The video starts off with Condon identifying himself and asking Brady repeatedly to shut the vehicle off. Brady refuses to comply, instead saying, “I just have music playing, man.”

When Condon again orders Brady to shut the vehicle off and show his hands, Brady draws a gun and starts firing at the officers. The officers return fire, each discharging his weapon multiple times.

After the shots ring out, Brady’s truck rolls forward and collides with a light pole. It’s not seen in the video, but the department says the three officers then created a perimeter until SWAT officers arrived to approach the vehicle safely.

Brady was removed from the truck, attended to by medics and pronounced dead at the scene. Officers found two rifles, a handgun, numerous boxes of ammunition and several spent casings inside his truck.

None of the Flagstaff police officers involved in the shooting were hurt, and all three men have been placed on standard administrative leave pending the results of the investigation, the department announced. 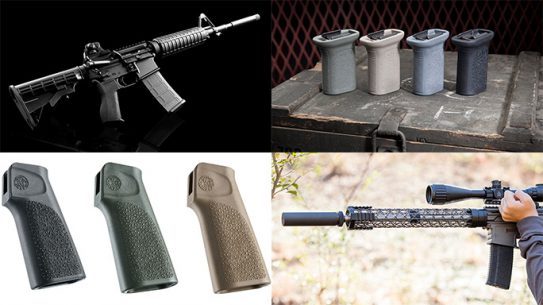 If you're looking to boost weapon control, comfort and modularity, consider these AR grips...