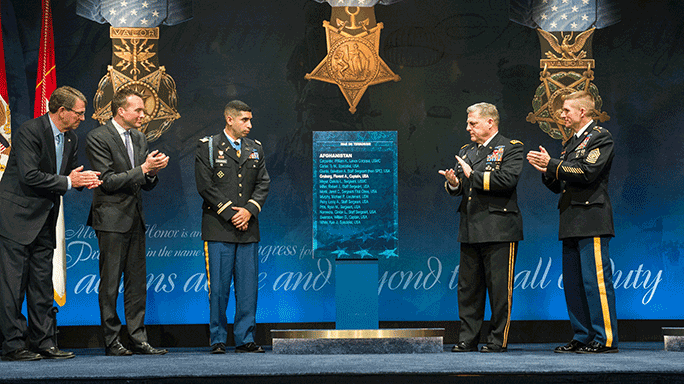 Photo by Staff Sgt. Steve Cortez
Secretary of Defense Ash Carter, Acting Secretary of the Army Eric Fanning, Medal of Honor recipient Capt. (Ret.) Florent A. Groberg, Chief of Staff of the Army Gen. Mark A. Milley and Sgt. Maj. of the Army Daniel A. Dailey unveil the plaque bearing Groberg's name during Groberg's Hall of Heroes Induction Ceremony at the Pentagon in Washington, D.C., Nov. 13, 2015. Groberg received the Medal of Honor for risking his life and going above and beyond the call of duty while serving as a Personal Security Detachment Commander for Task Force Mountain Warrior, 4th Infantry Brigade Combat Team, 4th Infantry Division, during combat operations in Asadabad, Kunar Province, Afghanistan on Aug. 8, 2012.
Comment(s)

The Army captain, who earned the Medal of Honor for tackling a suicide bomber in Afghanistan in 2012, was inducted into the Hall of Heroes during a ceremony at the Pentagon, Nov. 13.

During the event, Capt. Florent A. Groberg’s name was added to one of the plaques that line the walls of the Hall of Heroes, a small commemorative enclave just inside the entrance to the Pentagon. Groberg’s name now stands among the names of the more than 3,460 other recipients of the nation’s highest military award for bravery and selfless sacrifice.

Groberg is now medically retired from the Army.

After greeting Groberg’s parents, friends and ceremony attendees, Defense Secretary Ash Carter praised the members of the personal security detachment that the captain had been leading to the provincial governor’s compound in Asadabad, Afghanistan, Aug. 8, 2012.

“I want to thank the members of Capt. Groberg’s extended Family, his military Family, men who were his brothers on the battlefield who remained close to him in recovery,” Carter said. “From platoon Sgt. Brian Brink, who carried Capt. Groberg to safety, to Spc. Daniel Balderrama, who immediately treated his life-threatening wounds, to Sgt. Andrew Mahoney, who helped confront the suicide bomber, to Pfcs. Ben Secor and Eric Ochart, who carried members of the team to safety, each of you helped to save lives.

“You not only witnessed Capt. Groberg’s courageous decisions, you contributed to them … in so many ways, you were the reason he made them,” he added. “So while the medal is received by one; honor, courage and valor were required by all.”

While leading a dismounted movement of 28 coalition and Afghan National Army soldiers to the compound, in the space of some 30 seconds, Groberg recognized a suicide bomber who threatened his six charges by coming too close to their security diamond. Groberg ran toward the man, pushed him back, eventually causing the man to fall face down and release a dead-man’s trigger. In a hail of rock, ball-bearings, dust and debris, Groberg went airborne. He flew some 15-20 feet into a culvert and was knocked unconscious.

“So Capt. Groberg chose to commit himself completely to this country; he chose repeatedly to lead his fellow Soldiers with excellence; he chose to test himself against the absolute best, earning the Ranger tab,” Carter said. “And at the moment of greatest testing, he made the most selfless and courageous choice of all: to run toward the direction of danger; to willingly put his life on the line for the sake of his brothers.”

When Groberg awoke, he realized a second suicide bomb went off nearly simultaneously with the first. Four of his group had been killed.

“As Capt. Groberg has so often emphasized – we have a duty to honor those who can be with us only in spirit and memory,” Carter said. “To the Families of those who gave their lives serving with Capt. Groberg – Command Sgt. Maj. Kevin Griffin, Maj. Thomas Kennedy, Air Force Maj. Walter Gray and Raqaei Abdelfattah – you have our deepest sympathy and appreciation.

“As the Roman historian Tacitus wrote nearly 2,000 years ago: ‘In valor there is hope,’ so as we honor Capt. Groberg’s valor today, we too have hope that the liberty and security we enjoy today will be passed forward to future generations,” Carter said. “Thank you Capt. Groberg for your courageous actions, for your example and for your exceptional service to our nation.”

Following Carter, acting Army Secretary Eric K. Fanning said he was honored to be part of the event and that he was in awe of the deep humility and gratitude with which Groberg had expressed his feelings about the Soldiers he had served alongside.

“Our Soldiers make choices based on deeply ingrained values taught in basic training, fostered by education and time in service and demonstrated in combat, the Army values of loyalty, duty, respect, selfless service, honor, integrity and personal courage,” Fanning said. “Flo exemplified each of these values … he displayed these all simultaneously in one day, in one brief but decisive moment in Afghanistan three years ago.

“I’ve had the honor to spend time with Flo these past few weeks and because of that humility that I’ve seen first-hand, I was not surprised when Flo expressed a set of conflicted emotion about today’s celebration,” Fanning said. “‘Imagine,’ he said, ‘being honored for the worst day of your life.'”

Army Chief of Staff Gen. Mark A. Milley also recognized Groberg, calling him a representation of all that is best in all Soldiers.

“He epitomizes the warrior ethos and the Army values that Secretary Fanning just pointed out,” Milley said.

“He and his teammates who served with him in the 4th Infantry Division and others such as the 502nd of the 101st, they are really the strength that is our nation,” he said. “Their commitment and their courage to fight for a cause greater than themselves, to fight for the ideals of our nation … it’s evident in all of our Soldiers and we are proud to be among them today.

“Capt. Groberg never quit,” Milley said. “In facing great danger, he put the mission first and he never, ever accepted defeat and never once thought of himself. Today, he thinks of his fallen comrades … he has been there for the living and he’s there today for those who passed. Flo, you and your teammates are what make the Army strong.”

Following the induction and presentation of the personal Medal of Honor flag, Groberg spoke about his teammates and the four men lost on Aug. 8, 2012.

“I stand in front of you as a proud American, grateful that I’ve been given the opportunity to serve and wear the colors of our country in time of war,” he said. “I am blessed to be surrounded, trained, mentored, led and followed by some of our nation’s greatest warriors.”

He asked the men from his security detail to stand, then talked about what he learned from them and thanking them for saving his life.

“I have wonderful parents, [a] wonderful Family, but when you deploy and you’re in combat, these individuals become your brothers … you would do anything for them … I can’t say enough,” he said. “I’m so proud of you guys … it’s an honor to have served with you. You are brothers for life and I love you guys.

“And, now for the most important people here and not here: Command Sgt. Maj. Griffin, Maj. Kennedy and Maj. Gray and Ragaei Abdelfattah. On Aug. 8, 2012, our country lost four incredible Americans, four men who made the ultimate sacrifice … four individuals who changed lives around them for the better … four true heroes for which this medal and honor belongs to,” he said.

“I carry it in my heart; I carry it on my body; I carry it in my soul every single day,” Groberg said. “I miss them, and I understand that my responsibility is to live through them and to live for them and their Families and to be better. This is my goal, you’ve heard it many times and it will be my goal until one day I lay down on their ground and I join them in heaven.” 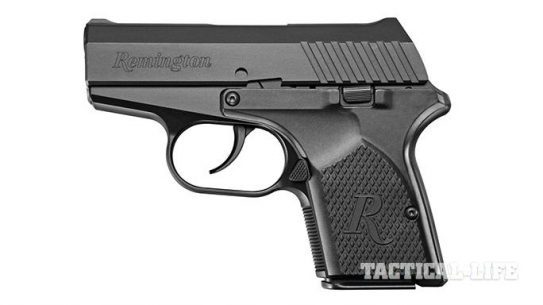 The all new RM380 handgun from Remington measures just 5.25 inches long and features...