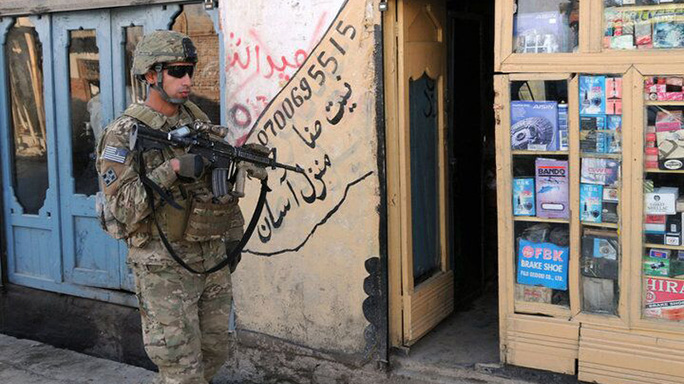 An American Soldier who was born in France, lived in Spain, and later moved to the United States with his family where he became a naturalized U.S. citizen in 2001, will receive the nation’s highest military award for actions in Afghanistan.

Capt. Florent A. Groberg, now medically retired, will receive the Medal of Honor from President Barack Obama, during a White House ceremony, Nov. 12.

Born in Poissy, France, in 1983, Groberg’s family would eventually move to Spain, back to France, and then finally to the nation’s capital. He became a U.S. citizen by his 18th birthday and graduated from Walter Johnson High School in Bethesda, Maryland, in June 2001.

Known as “Flo” to his friends, Groberg next attended the University of Maryland, where he competed in varsity track and cross country. He graduated with a Bachelor of Arts in criminology and criminal justice in May 2006.

By then, Groberg said, he felt he owed something to the country he’d sworn allegiance to. So in July 2008, he signed up for the Army, and was off to Officer Candidate School on Fort Benning, Georgia.

By December 2008, he was commissioned as an 11A infantry officer. Being one to challenge himself, he also completed the Infantry Officer Basic and Mechanized Leaders Courses, and then followed on with Army Airborne and Ranger Schools.

Groberg said he felt compelled to join the Army and wear the uniform.

“The proudest thing I’ve ever done in my life is to be able to wear this uniform and serve this country with some of the greatest people I’ve ever met and will always know,” he said.

With schools behind him, he next took on his first role as a platoon leader with the 4th Infantry Division on Fort Carson, Colorado. By December 2009, he was leading his unit with Task Force Lethal through the Pech River Valley in Afghanistan’s Kunar province.

Having been trained at several of the Army’s elite leadership schools doesn’t by default make a second lieutenant a respected leader in a kinetic area like Kunar province, Groberg remembered.

“I didn’t know anything about being a platoon leader or being a leader of men who had already been in combat for months,” Groberg said. “So when I was tasked with being a platoon leader, I found out it was going to be a different transition for me to earn respect from men who were already battle-hardened Soldiers.”

Groberg said he had a meeting with his platoon sergeant, Sgt. 1st Class Korey Staley, to discuss the situation.

“I told him I’m as green as it gets and I’m not over here trying to make mistakes – you have to be my mentor and teach and work with me. He was happy that I had come into the unit with that type of mindset, so for the first week I just over-watched everything the unit did – how we reacted in combat situations,” Groberg recalled.

“We were in many, many firefights together. Because of the leadership and trust we developed, I understood that no officer will ever be successful without the direct support and mentorship of a noncommissioned officer [NCO],” Groberg said. “Because of that, we were able to bring everyone home from the deployment.”

Upon returning home in June 2010, Groberg continued serving as a platoon leader until he was promoted to first lieutenant and reassigned as an infantry company executive officer. He held that position from October 2010 until November 2011. He next became the personal security detachment commander for the 4th Infantry Brigade Combat Team, 4th Infantry Division.

In February 2012, he returned to Kunar province with Task Force Mountain Warrior. In July 2012, he was promoted to captain.

On the morning of Aug. 8, 2012, Groberg and five other Soldiers were providing a personal security detail for seven senior leaders, and were leading a dismounted movement of 28 coalition and Afghan National Army, or ANA, troops to the provincial governor’s compound in the city of Asadabad.

“The mission that day was one that we had done on a week-to-week basis for five or six months. Maybe 20 times we’ve done that same exact mission, so we knew what to expect of the area,” recalled Groberg’s radio telephone operator, Sgt. Andrew J. Mahoney. “Basically, the governor of the province brings all the village elders from around the area and coalition military leaders together to discuss on-going projects.”

Mahoney noted that the captain would go inside, sit as security and act as scribe so the colonel wouldn’t have to take notes. The rest of the detail would pull security around the building’s perimeter with ANA support. That would be the routine.

But that day would be anything but routine.

Groberg was in the lead at the top of the security diamond, escorting three brigade commanders, three battalion commanders, and an Afghan general. As the detail moved cautiously down the street toward the governor’s compound, an ambush started to unfold – first with two motorcycles as a diversion, which the ANA soldiers managed to flag down.

“A man came out of a building to our left walking backwards,” Groberg said. “It was eerie and looked suspicious. I yelled at him and he turned around immediately and then started walking towards us. He looked like a young man with a beard, wearing man-jams and dark clothing. He didn’t appear to be himself that day … most likely drugged.

“Sgt. Mahoney to my left moved in with me and struck him, then Mahoney and I threw him. I pushed him as hard as I could away from our patrol, because I felt he was a threat. I just wanted to make sure he wouldn’t hurt anyone,” said Groberg, adding that he had noticed an abnormal bulge under the man’s clothing.

As Groberg grabbed the intruder by the vest and Mahoney piled on to drive the man into the road, Groberg knew what was about to happen. From the point of identifying the security breach to reacting took about 10 seconds.

The man landed chest-first on the ground. As he slammed onto the road, he released a dead-man’s trigger, which he had squeezed and held before walking towards the Soldiers. The vest flashed, sending thousands of lethal ball-bearings flying.

Nearly at the same moment, a second suicide bomber set off his own bomb.

When the dust settled, five of those who were on the mission that day had been killed. Among them were Command Sgt. Maj. Kevin Griffin, the brigade’s senior enlisted advisor; Maj. Thomas Kennedy; Maj. Walter Gray, an Air Force officer who helped coordinate air strikes; and Ragaei Abdel Fattah, a volunteer worker with the U.S. Agency for International Development, Groberg said.

The first explosion threw Groberg and Mahoney some 15 feet from the blast. While they had serious injuries, they were both alive – something Mahoney said he has been hard-pressed to explain.

After the detonation of the explosive, Groberg struggled to regain control of the situation.

“I remember waking up in shock. My helmet was loose so I threw it away. I couldn’t find my rifle, but picked up my pistol and made sure I had a round in the chamber,” Groberg said. “I couldn’t remember what happened. I thought I had stepped on an IED [improvised explosive device]. My fibia was sticking out of my left leg, my skin was melting, and there was blood everywhere. I checked myself for internal injuries and started to drag myself out of what was probably a kill zone for small-arms fire.”

Help came from his platoon sergeant, who grabbed the captain by the handle of his plate carrier and dragged him into a ditch. There, the group’s medic, Spc. Daniel Balderrama, applied a tourniquet to stop the bleeding. Balderrama was himself injured.

“We’re going to save that leg … you’ll be fine,” said Groberg, recalling what the medic had told him, before he hobbled off to help the next wounded Soldier.

Groberg said he remembers being carried to an armored truck, and that he wasn’t going willingly. He said he remembers that he had a lot of unanswered questions then. How’s his charge, brigade commander Col. Charles Mingus, for instance? He learned the commander had a slight concussion, but otherwise, “the boss” was fine. Still, he wanted a status report and wanted to be the leader his NCOs had made him.

Finally, his Soldiers moved Groberg to the truck and loaded him in. He said he was still trying to direct operations and control all that he could – he felt it his responsibility.

Then, a senior NCO stared him in the eyes and said, “Sir, I’ve got this – you’re done – now it’s time for you to recover,” said Groberg, recounting the words of the NCO. “Then he stepped back and closed the door.”

Since that day a little more than three years ago, Groberg has been through 33 surgeries to keep his leg. He wants to run again, just as he did in college, though he knows he won’t ever run with the same quickness. He still has two legs and continues to push himself through the pain that exists both physically and from the loss of comrades.

“Receiving the Medal of Honor is not about me,” he said of the honor. “It’s about a terrible day that translated into the loss of four brothers.”

Mahoney’s actions on that day in August 2012, earned him the Silver Star. The sergeant was also recognized as the USO Soldier of the Year during an October 2014 ceremony in Washington, D.C. Groberg made it a point to attend that ceremony once Mahoney told him about it.

“I sent a short text to him and he replied simply that he’d be there for the ceremony and the next thing I knew he showed up,” Mahoney said. “He came out of the woodwork and there he was standing tall and proud to be there for me and my family…I hope I can do that for him.” 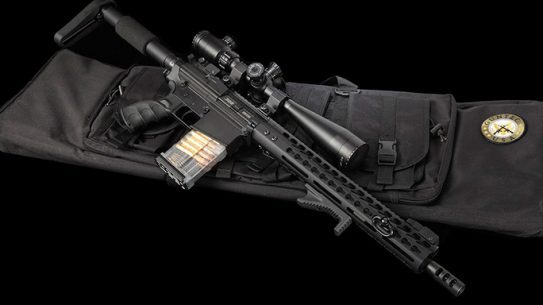 Guntec has unveiled a 12-inch and 15-inch model of its ultra lightweight, thin KeyMod...