The Orlando Sentinel reports that the crime spree began on June 30 when 32-year-old Benjamin Hovan broke into an apartment in Casselberry. Armed with a knife, Hovan ordered the two women inside the apartment to the floor. He then rifled through their belongings. Eventually, Hovan told the women to go into a bedroom, where he proceeded to rape one of them.

Hovan then forced the women to drive him to a Publix, where he ordered one of them to get money from a nearby ATM. Instead, the woman told a Publix employee to call 911.

When Hovan realized what was happening, he kicked the other woman out of the car and sped off.

The Casselberry Police Department identified Hovan using fingerprints left at the scene in the apartment; a massive manhunt ensued.

While he was on the run, Hovan ditched the stolen car and broke into a home in Maitland. The family living in the home was on vacation at the time. Hovan stayed at the home for several days.

Last Wednesday, Hovan broke into the home of a 62-year-old woman in South Miami. During that incident, he stole the woman’s jewelry and pistol-whipped her before stealing her car.

On Thursday morning, Officer Austin Quinn of the Titusville Police Department was leaving a gas station in Marathon when he noticed a man who looked like Hovan going into the store. While Hovan was in the store, Quinn ran the license plate on the car. That’s when he found out it was reported stolen during the South Miami home invasion the previous day.

When Hovan walked out of the store, Quinn ordered him to the ground. Hovan complied, but then he got up and started running.

Quinn tried using his Taser, but the probes didn’t connect. He then reloaded and tried again. This time, he was successful in taking down the fleeing Hovan.

Hovan was booked into the Brevard County Jail. He’s due to be transferred to Seminole County, where he’ll face charges of home invasion, sexual battery and kidnapping. He’s also being charged with Burglary of an Unoccupied Dwelling, Possession of Burglary Tools, Grand Theft Motor Vehicle and Petit Theft by the Tallahassee Police Department, stemming from a burglary and car theft incident that took place a couple of days before the rape and kidnapping. Hovan will also no doubt face charges related to the South Miami home invasion and Maitland home burglary as well. 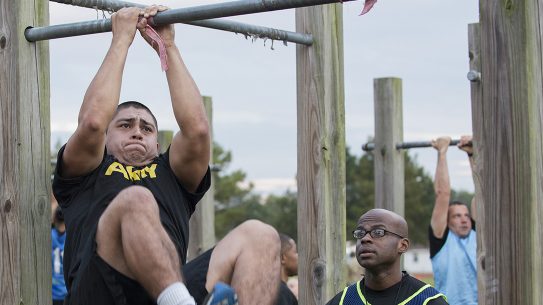 The New US Army Combat Fitness Test Is No Joke

Starting in October 2020, soldiers will be required to pass the gender- and age-neutral...