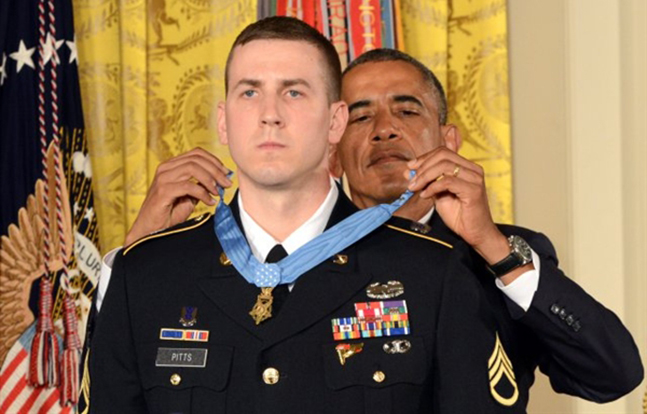 Pitts is the ninth living recipient to receive the Medal of Honor for actions in Iraq or Afghanistan, according to a Department of Defense release.

The award was bestowed upon Pitts for his actions on July 13, 2008, during operations at Vehicle Patrol Base Kahler, near the village of Wanat in Afghanistan’s Kunar province.

Pitts, with 2nd Platoon, Chosen Company, 2nd Battalion (Airborne), 503rd Infantry Regiment, 173rd Airborne Brigade, was manning the observation post just outside the base when potential insurgents were observed in the predawn darkness. Before a request for indirect-fire support could be put through to the main base, “the entire valley erupted,” Obama said.

Soon after the initial wave of enemy fire, everyone at the observation post was wounded or killed. The situation down at the base was no less dire, with one soldier describing it as “hell on Earth,” Obama continued.

Pitts, with shrapnel in his arm and both legs, was bleeding badly. Despite these severe injuries, he threw grenades toward the insurgents, but only after pulling the pin and holding the live grenade long enough that the insurgents closing in would have no time to throw the grenade back.

Pitts held his ground against the insurgents, who by then were inside the post, pulling himself onto his knees to man a machine gun.

Along with his relentless fight, Pitt also helped to target airstrikes against the insurgents.

These strikes marked the turning point in the battle and, finally, the insurgents fell back.

In total, there were nine soldiers who perished in the attack. Pitts said the Medal of Honor is theirs, not his.

“Valor was everywhere that day,” Pitts said in a statement at the White House following the ceremony.

“And the real heroes are the nine men who made the ultimate sacrifice so the rest of us could return home,” he added. “It is their names, not mine, that I want people to know.” 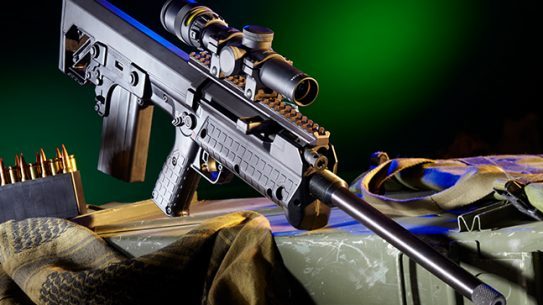 Best of the Bullpups: Top 12 Compact Rifles and Shotguns

Top 12 bullpup compact rifles and shotguns built to dominate in close quarters on...