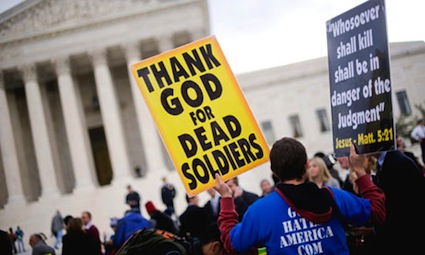 Jacob Phelps of Westboro baptist church protests in front of the US supreme court as a case begins over military funeral protests. Photograph: Shawn Thew/EPA

In a key test of free speech protections in the US, the supreme court has heard arguments about whether a fundamentalist church had the right to picket a marine’s funeral with signs like “Thank God for Dead Soldiers”.

Members of the Westboro baptist church in Topeka, Kansas, protested at the 2006 funeral of Lance Corporal Matthew Snyder to express their view that US deaths in Afghanistan and Iraq were God’s punishment for US immorality and tolerance of homosexuality and abortion.

They were fined $5m (£3.1m) for intentional infliction of emotional distress, but an appeals court threw out the verdict on the grounds that the first amendment to the US constitution guarantees the right of free speech.

Yesterday, a Westboro church member, Margie Phelps, told the court that the message of the protests at military funerals and elsewhere was: “Nation, hear this little church. If you want them to stop dying, stop sinning.”

But in a rare public display of sympathy, the justices strongly suggested they would like to rule in favour of Albert Snyder.

“This is a case about exploiting a private family’s grief,” said Justice Ruth Bader Ginsburg, who questioned whether the first amendment should protect the church members.

Justice Samuel Alito wanted to know if the constitution would shield someone who delivered a mean-spirited account of a soldier’s death to the serviceman’s grandmother while she was leaving her grandson’s grave. “She’s waiting to take a bus back home,” Alito imagined, and someone approaches to talk about the roadside bomb that killed the soldier. “‘Let me describe it for you, and I am so happy that this happened. I only wish I were there. I only wish that I could have taken pictures of it.’ And on and on. Now, is that protected by the first amendment?”