Gainesville Police Officer Bobby White has been in the news a lot in the last week, and for all of the right reasons.

On Jan. 15, White was dispatched to a complaint of kids playing basketball “loudly” in the streets. When White arrived, he took matters into his own hands.

He explained to the kids that he was called because they were being loud while playing basketball. Rather than reprimand the kids for doing nothing wrong, White asked for the ball and starting shooting hoops with the kids.

As the officer continued to play basketball, more and more kids found their way out onto the street to play.

“We’re going to let kids be kids. We are going to focus on the ones that commit crimes,” the Gainesville Police Department said in a statement to the person who initially called the cops on the kids.

When White left, he asked if the kids were out there every day at the same time, and vowed that he’d return with backup for a better game the next time.

True to his word, White returned just a few days later with other members of the Gainesville Police Department. But the local department didn’t stop there.

Joining the Gainesville Police was former NBA center Shaquille O’Neal, who had seen the original viral video and wanted to be a part of the action.

Shaq’s participation was a surprise not only to the local kids, but to White, who was shocked when the massive NBA Hall of Famer walked into the department’s headquarters. 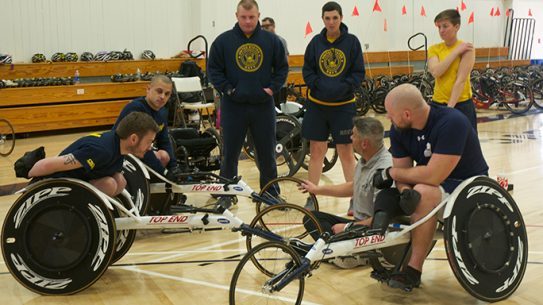