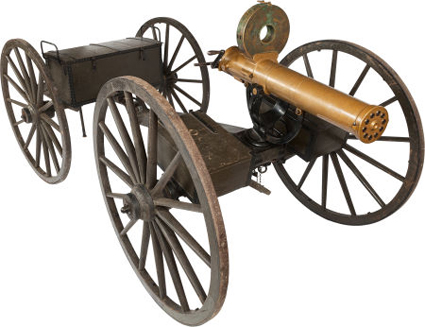 Heritage Auctions is rolling out the big guns…

A U.S. Model 1883 Colt Gatling Gun and Rare Limber With Accessories. Serial no. 342 with 10 32-inch barrels – for decades the centerpiece of the collection of renowned Michigan Civil war re-enactor and firearms expert Michael Yeck, who passed away last year – is expected to bring more than $100,000 on June 8 as part of Heritage Auctions’ June 9 Civil War and Militaria Signature Auction.

“To call the Gatling Gun one of the most spectacular and evocative weapons ever made understates its impact on the American psyche,” said Cliff Chappelle, Consignment Director for Arms & Armor at Heritage Auctions. “The chance to acquire one of these spectacular guns, let alone one as well-preserved, as sizable and from such an impeccable source, does not come around very often, I can assure you that.”

The day before the Model 1883 Gatling Gun is offered, a second, smaller Gatling Gun from Yeck’s collection – a U.S. Model 1875 .45 government caliber Colt Gatling Gun, serial no. 293, on its original Naval boarding carriage, delivered to the U.S. Navy on Feb. 24, 1881 – will come across the block as part of Heritage’s June 8 Arms & Armor Signature Auction. It is also expected to bring more than $100,000+.

“He bought the guns primarily to promote himself and his business and to have a goodtime,” said Matthew Hand, Yeck’s grandson and the executor of his grandfather’s estate. “In the 1960s and 1970s he was the largest black powder muzzle loading weapon supplier in the Midwest. In fact, there are still a number of Civil War re-enactment weapons out there made by him and with his equipment on them.”

Yeck, a veteran of the Normandy Invasion, was told by his doctor in the early 1960s that he was getting an ulcer and needed to find a hobby to help him relax. Yeck soon found himself drawn into the world of black powder muzzle loading weapons, acquiring a flintlock pistol. Intrigued, and never one to do anything halfway, Yeck soon started acquiring a wide variety of powder and ball weapons, learning about their make and manufacturing them himself.

“He kinda went all out,” said Hand, “and decided to start his own antique firearms business, which kept growing and growing through the 1960s, 1970s and in to the early 1980s, when he finally had to slow down.”

Yeck became very well known in collecting circles for his extensive militaria, artillery, machine gun, World War I and II rifles and uniforms collections, as well as his impressive grouping of classic and antique cars. Along the way, as he participated in more and Civil War re-enactments, he and his business, Michael Yeck Antique Firearms, became a fixture on the scene at any gathering or demonstrations.

“Anytime there was a big shoot or a show, he would bring the big Gatling Gun along, set it up and demonstrate it,” said Hand. “He was a fixture at Greenfield Village in Dearborn (MI) and would take it all over the Midwest.”

The most important questions for collectors may well be a) do they work and b) what’s it like to fire them. The answer to the first question is obviously yes, as seen in the video linked here.

The second question is best answered in Hand’s own words:

“The large gun is just massive, bumps a little every time you fire and gives you a sense of control – you can feel every round,” he said. “The smaller one you have to crouch behind it and it literally roars shakes the ground. You can feel the percussion in your face.” 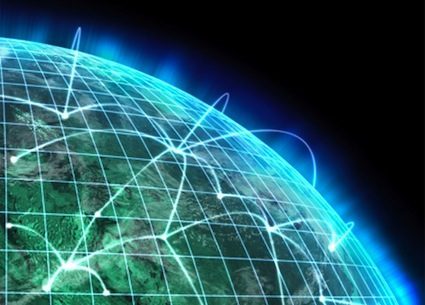 Heritage Auctions is rolling out the big guns... A U.S. Model 1883 Colt Gatling…