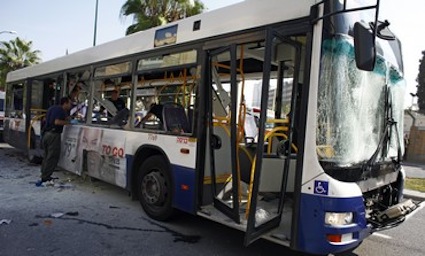 An Israeli police officer looks at a damaged bus after an explosion in Tel Aviv November 21, 2012. An explosion hit a bus in the heart of Tel Aviv on Wednesday, wounding at least 10 people in what officials said was a terrorist attack. REUTERS/Nir Elias

U.S. Secretary of State Hillary Clinton on Wednesday pursued a Gaza truce, with Israel and Hamas still at odds over key terms, as Israeli air strikes shook the enclave and a bomb exploded on a Tel Aviv bus.

After talks in Ramallah with Palestinian President Mahmoud Abbas, Clinton held a second meeting with Israeli Prime Minister Benjamin Netanyahu before travelling to Egypt for discussions with President Mohamed Mursi, whose country is the main broker in efforts to end eight days of fighting.

In Tel Aviv, targeted by rockets from Gaza that either did not hit the city or were shot down by Israel’s Iron Dome interceptor system, 15 people were wounded when a commuter bus was blown up near the Defence Ministry and military headquarters.