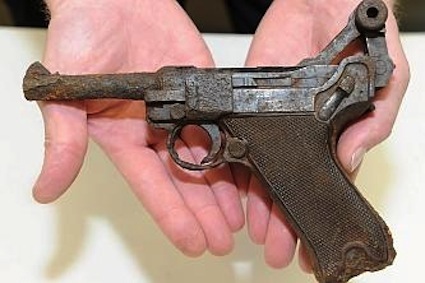 A wartime German pistol has been unearthed on a city center building site.

Workman Bob Shimmels found the Luger while clearing a site in Story Street for the new Wilberforce Health Centre.

Mr Shimmels, 34, said: “I was digging close to the building and had just taken a bucket load of rubble out.

“The gun dropped down from between the foundations and a chimney on to the soil below.

“I have never found anything like this. I’m quite interested in history. It is all fascinating to me.”

Lugers were manufactured by German company Mauser and were used as sidearms, mainly by officers. They were sought-after souvenirs and commonly taken by Allied troops returning from war. It is thought the 9mm pistol – stamped 1943 – may have been brought home by a soldier as a souvenir.

The pistol could be one of the last made by the German arms manufacturer, as it ceased production that year. Dave Barley, site manager for Sewell Group, which runs the site, said: “It’s my understanding that often during the war soldiers took souvenirs from Germany.

“Perhaps this was one of those souvenirs and was hidden away until now. It’s been an interesting find and quite an education over the past couple of days.”

Between 1854 and 1943 the site was home to Hull Municipal Museum. On June 24, 1943, a German air raid destroyed the building. A basement, filled with priceless collections, was left entombed. In 1989, the Phoenix Project was launched and the then car park was dug up to rescue the artifacts.

Due to the age of the weapon, as indicated by the stamp, it is thought unlikely the Luger was part of the official museum collection.

Source and Photo: This is Hull and East Riding.

A wartime German pistol has been unearthed on a city center building site. Workman…