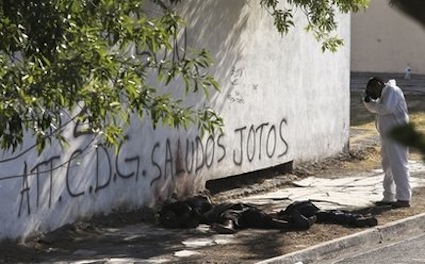 A forensic expert photographs the scene where three dead men were found in Monterrey, Mexico, Wednesday June 15, 2011. A warning message to a rival drug gang was left painted on the wall. The area in northern Mexico has been a scene of constant killings and reprisals since a rupture between the Gulf and Zeta cartels in late 2009.« Read less (AP Photo/Hans Maximo Musielik)

Police on Wednesday found the dismembered bodies of two bodyguards who worked for the governor of the Mexican state of Nuevo Leon, the site of a violent turf war between drug cartels.

Authorities believe Gov. Rodrigo Medina’s bodyguards were killed by a drug cartel. A message left near the bodies accused Medina of favoring a rival drug organization.

Medina confirmed that the victims were part of his security detail and called the killings “cowardly.” He told local media later that “no message, no threat will make us stop in this fight” against organized crime.

The bodies were found at an intersection in Guadalupe, a suburb of the state capital Monterrey. The city, Mexico’s third largest and one of its most wealthy, has been the scene of bloody cartel turf battles that have included frequent attacks on police.

The area in northern Mexico has been a scene of constant killings and reprisals since a rupture between the Gulf and Zeta cartels in late 2009.

A forensic expert photographs the scene where three dead men were found in Monterrey,…