An officer with the Grand Rapids Police Department in Michigan was forced to shoot a suicidal woman with less lethal bean bag rounds in order to prevent her from further harming herself with a knife. Watch the incident unfold via the body cam footage above.

NBC affiliate WOOD-TV reports that the incident happened last Thursday afternoon. GRPD Officer Kait Bernardo, whose body cam video was released to the media, can be heard repeatedly asking the unidentified woman her name. She also tells her to drop the knife and assures her that police don’t want her to hurt herself.

“If you put the knife down, you can come and sit in my car and talk to me,” Bernardo says. “… You’re not in any trouble. We just want to know what’s going on here.”

Bernardo and several other officers tried to reason with the woman from across the street.

Eventually, when it became apparent that the woman wouldn’t listen to commands, the officers made the decision to use bean bag rounds. At the 4:56 mark in the video, an officer fires four rounds from his less-lethal shotgun. Once the woman goes down, the officers swarm in and handcuff the woman as she writhes around on the ground.

The woman was transported to an area hospital for treatment of her cuts. She also received a psych evaluation. She won’t be charged with any crime.

Bernardo, a 12-year veteran of the Grand Rapids Police Department, told WOOD-TV that she’s never seen bean bags used during an encounter on the street. She has, however, come across her fair share of mentally disturbed individuals.

“She was not in a good state of mind and I was hoping that I could help her out with whatever she was going through that day,” Bernardo later said. “We always hope for the best. … Sometimes that’s not how it goes. But in this case it went exactly like we hoped it would.” 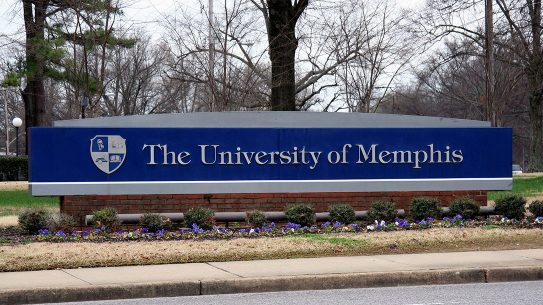 The University of Memphis in Tennessee has announced that the Folds of Honor scholarship,...