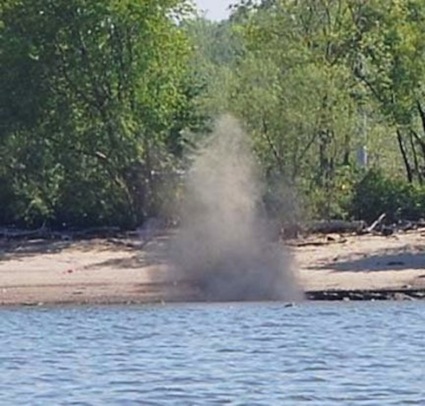 (Photo: Sunbeam/Wilmington Police Department) Smoke is seen after a grenade found near the Carneys Point shoreline in the Delaware River is detonated by police.

The grenade was discovered Thursday afternoon stuck in the mud in shallow water off the shoreline of Helms Cove here. The kayaker said he shored his boat and immediately called Carneys Point Police and then showed the local officer where the ordnance was located.

On Friday, Delaware State Police informed Wilmington Police that the grenade was initially spotted in waters under their jurisdiction.

Marine units from the Wilmington Police Department continued the search Friday and located the pineapple-style grenade at around 2:30 p.m. during low tide.

The explosive was detonated in about four inches of water he said.

Barnes said when the grenade was found the pin was still intact.

(Photo: Sunbeam/Wilmington Police Department) Smoke is seen after a grenade found near the Carneys…