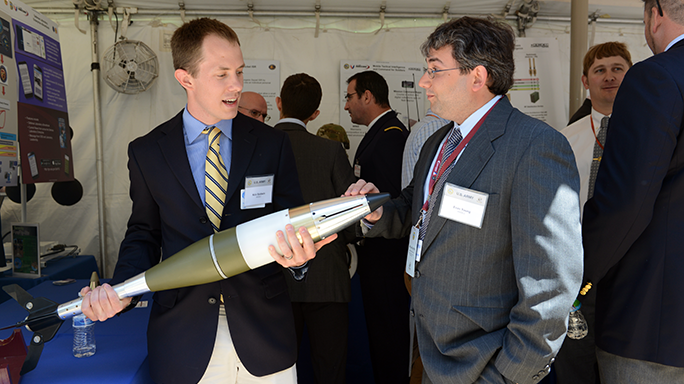 Nick Baldwin and Evan Young, researchers with the Armament Research Development and Engineering Center at Picatinny Arsenal, Pennsylvania, discuss the 120mm Guided Enhanced Fragmentation Mortar during the DOD Lab Day, May 14 at the Pentagon.
(Photo by C. Todd Lopez)
Comment(s)

During DOD Lab Day at the Pentagon, May 14, multiple researchers from throughout the Army were available to demonstrate their projects, including Nickolas B. Baldwin, a researcher and mechanical engineer with the Armament Research Development and Engineering Center, or ARDEC, at Picatinny Arsenal, Pennsylvania. He serves as the ARDEC project officer for the 120mm Guided Enhanced Fragmentation Mortar, or GEFM, program.

The GEFM is a GPS-guided mortar that will make it easier for Soldiers to put a round on target.

“With [a] conventional mortar you are at the mercy of the ballistic calculations,” Baldwin said. “With a conventional non-smart round, you really have to bracket in your target. There is a certain dispersion, or round-to-round variability in shooting a conventional munition. What happens sometimes is, based on the weather for the day, or the aiming error or the weapon, there is a certain error associated with it. So you adjust fire after your first round down range and hopefully get fire for effect.”

A precision-guided mortar takes that variability out of the equation, Baldwin said.

“You input the GPS coordinates of where you want it to go and once it gets up in the air, it figures out where it is and where it is going and how to reduce the error to the target,” he said.

The GEFM is the proposed government solution for the 120mm High Explosive Guided Mortar, or HEGM, program. That program will eventually release a request for proposal that asks industry to propose their own solutions for a smart mortar.

The GEFM is not the Army’s only smart mortar, however. One already exists in the inventory, called the Accelerated Precision Mortar Initiative, or APMI.

Baldwin said that between 2007 and 2009, there had been several operational needs statements that came in from Iraq and Afghanistan requesting a precision-guided mortar for use “in urban environments, where collateral damage is a concern, and in mountainous terrain where the traditional ballistic trajectory wasn’t able to get into some of the pockets the enemy was operating out of. They wanted the ability to have single-shot kill against some of these higher value targets.”

With a non-guided mortar, Baldwin said, “you give the enemy the opportunity sometimes to flee or take cover by the time you actually get them bracketed in to fire for effect. So based on that needs statement that came out, an urgent materials release program was set up and basically the predecessor to this, a vendor-solution, was fielded called APMI. It was great and filled the need at the time. It met the needs of the Urgent Material Request, but it had some limitations in performance due to the rapid fielding nature of the program.”

Today, the Army’s HEGM program seeks a precision-guided mortar that improves on the APMI in areas like range, lethality, and reliability. The GEFM is the Army’s suggestion as to what the HEGM program should produce. When the time comes to solicit ideas from industry, Baldwin said the Army’s idea, the GEFM, will be made available to them for their use.

“We are going to provide a fully mature technical data package to industry and then industry might pick that up as a low-risk, high-performing capability that is kind of ready for prime time.”

Baldwin said that in development of the GEFM, they worked “hand-in-hand” with those who wrote the requirements for a precision-guided mortar. He said he expects an operational demonstration of the system next year. 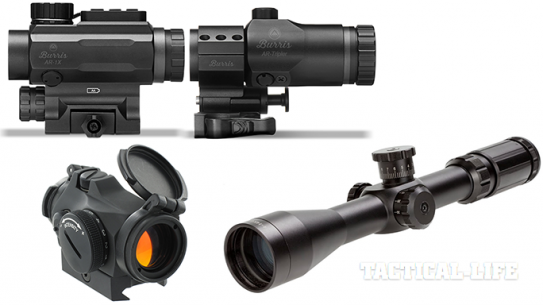 Gun Buyer's Guide 2015 details optics, muzzle breaks and more to make sure you're...