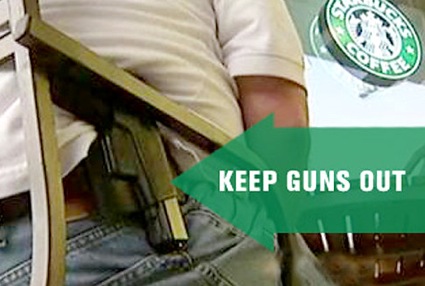 Dale Welch recently walked into a Starbucks in Virginia, handgun strapped to his waist, and ordered a banana Frappuccino with a cinnamon bun. He says the firearm drew a double-take from at least one customer, but not a peep from the baristas.

Welch’s foray into the coffeehouse was part of an effort by some gun owners to exercise and advertise their rights in states that allow people to openly carry firearms.

Even in some “open carry” states, businesses are allowed to ban guns in their stores. And some have, creating political confrontations with gun owners. But Starbucks, the largest chain targeted, has refused to take the bait, saying in a statement this month that it follows state and local laws and has its own safety measures in its stores.

“Starbucks is a special target because it’s from the hippie West Coast, and a lot of dedicated consumers who pay $4 for coffee have expectations that Starbucks would ban guns. And here they aren’t,” said John Bruce, a political science professor at the University of Mississippi who is an expert in gun policy.

Welch, a 71-year-old retired property manager who lives in Richmond, Va., doesn’t see any reason why he shouldn’t bear arms while he gets caffeinated.

“I don’t know of anybody who would provide me with defense other than myself, so I routinely as a way of life carry a weapon – and that extends to my coffee shops,” he said.

The fight for retailers heated up in early January when gun enthusiasts in northern California began walking into Starbucks and other businesses to test state laws that allow gun owners to carry weapons openly in public places. As it spread to other states, gun control groups quickly complained about the parade of firearms in local stores.

In one case, about 100 activists bearing arms had planned to go to a California Pizza Kitchen in Walnut Creek, Calif., but after it became clear they weren’t welcome they went to another restaurant. That chain and Peet’s Coffee & Tea are among the businesses that have banned customers with guns.

Read more of the AP story at The NY Daily News.

Dale Welch recently walked into a Starbucks in Virginia, handgun strapped to his waist,…