LAS VEGAS – Beneath the gold-flecked chandeliers and classical murals in the meeting rooms of the Venetian hotel and casino, the mighty $28 billion-a-year firearms industry opened one of its most opulent annual shows Tuesday.

Industry members networked while catching up on the newest weapons and gun gear from 16,000 vendors spread across more than 630,000 square feet. That there are renewed calls for tougher gun restrictions after a Jan. 8 shooting rampage in Arizona killed six people and wounded 13 others — including apparent assassination target U.S. Rep. Gabrielle Giffords — did little to dampen spirits at the giant show.

Barbara Heetderks of Dallas elbowed her way through a throng of arms dealers, shooting range owners, military buyers and law enforcement officers in search of the perfect ammunition for “Maya,” “Joe” and the other 40 rifles and pistols that make up her personal gun collection.

“It’s packed in here,” observed Heetderks of the crowd at the National Shooting Sports Foundation’s Shooting, Hunting and Outdoor Trade (SHOT) mega-show. She was clad in a shirt emblazoned with the flag of Texas and a pin that read, “I’m the NRA and I vote.”

Rep. Carolyn McCarthy, a New York Democrat, introduced legislation in Washington Tuesday that seeks to ban large capacity ammunition magazines like those recovered at the Arizona crime scene. Her husband was killed and her son seriously wounded in a 1993 shooting on the Long Island railroad.

“Even gun owners, NRA gun owners, have said to me there is no reason why we need to have these large capacity clips, especially for personal security,” she told The Associated Press. “I just hope people understand we are not after their guns but there are things we can do to protect lives.”

Tensions between public safety and constitutional rights have flared up after previous mass shootings and have resulted in little change.

But antigun advocates are hopeful Congress will be pushed into action now that one of their own was attacked.

“This (large capacity) magazine is designed for one thing — to take out as many people as possible,” said Joshua Horwitz, executive director of the Coalition to Stop Gun Violence in Washington, D.C.

Organizers said those affected by the shooting were in their prayers, but urged lawmakers not to link the killings to gun laws.

“The recent tragedy in Tucson was not about firearms, ammunition or magazine capacity,” said Ted Novin, spokesman for the National Shooting Sports Foundation. “It was about the action of a madman.”

Conventioneers also groaned at the prospect of any new battle over gun rights.

“I think it’s absolutely ignorant,” said Chris Marshall, a sales director at the Big Darby Creek Shooting Range in Ohio, as he toured the Las Vegas show Tuesday. “This was a very ill young man and they are trying to pin this on all gun users.”

Rules in the convention hall were strict, however, with no one under age 16 allowed and personal firearms banned.

Iain Harrison, a spokesman for Crimson Trace, an Oregon-based manufacturer, said participants flock to the show each year mostly to put a face to the distributors they have worked with. Harrison’s firm showed off more than 62 models, including a Smith & Wesson with a light and laser that wasn’t slated to hit the market until late Tuesday.

“This has been growing year after year,” Harrison said of the show. “Nothing draws a crowd like a crowd.”

“Any legislation that restricts the Second Amendment would not be good for us,” Harrison said.

For some, the right to bear arms represents a more personal battle.

Heetderks said she began carrying a gun every day after she was raped some years ago.

“I’m not physically strong enough to fight off a man,” she said of her assailant. “If I had a gun, I would have killed him.” 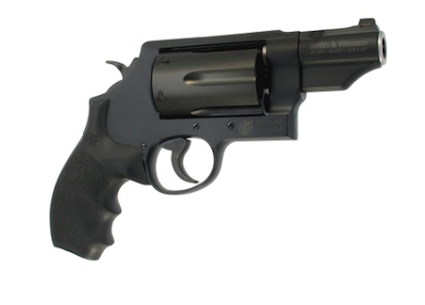