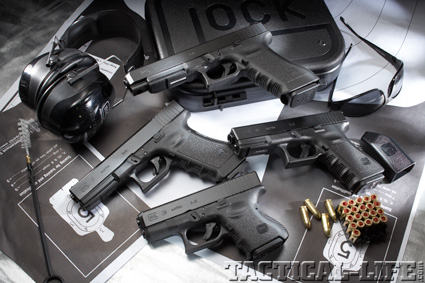 My first exposure to a Glock pistol was when I received  a phone call from my cousin Mike, a New York State Trooper. The NYSP just replaced their revolvers with the Glock 17 in 9mm. Mike, as a firearms instructor, was transitioning his troops to the new pistols. He was something of a traditionalist, as was I, so his enthusiasm for this new gun was surprising.

I remember him saying how the poorer shooters had dramatically improved hits on target with the new gun, compared to the .357 Mag revolver with magnum ammunition previously issued. He also said that NYPD investigators had initially voiced concerns about their gun’s size. However, they found that it concealed as easily as the large frame revolvers they carried and the 17 rounds of ammunition in the Glock magazine was a great advantage as well as easy to reload.

The law enforcement agency I was employed by at the time carried another brand of 9mm. We were required to
carry our issue pistol on duty and Glock was not on our approved off-duty list. I continued to follow one US law enforcement agency after another, transitioning from revolvers to the Glocks. They all cited the same reasons as the NYSP: an ease of transition from the double-action (DA) revolver to the Glock Safe Action, its lightweight, its large magazine capacity and shootability when your life is on the line. 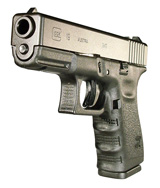 Glock 19
I purchased my first Glock in 1994, a Glock 19. My own transition was easy. This gun was lighter, had a smoother and consistent trigger, better sights, larger ammunition capacity and more durable magazines. It was easier to disassemble and more accurate than the pistol I had carried for many years. With all of these positives came its increase in reliability of function. It truly seemed to be the perfect pistol. I allowed my friends, all experienced shooters, to shoot my Glock 19. Even the most ardent traditionalists who had to have wood grips and steel frames agreed that this pistol was revolutionary in handgun design and function. 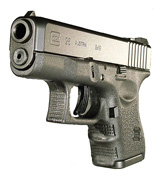 Glock 26
I followed my procurement of a Glock 19 with the Glock 26. This subcompact kept all of the features previously outlined of the Glock system but in a more concealable configuration. Here was an effective caliber pistol a 9mm with a 10-round magazine capacity, which was not much larger than a 2-inch five-shot .38 Special revolver.

The sight system of the larger Glock pistols was retained along with the same consistent Safe Action Trigger. The polymer frame and Tennifer-finished slide make the gun ideal for “deep cover” concealment. As with all Glock pistols, the Glock 26 remains virtually impervious to climatic conditions.

I continued to use and carry these two Glocks for a number of years. My Glock 19 was a constant companion and to date has a recorded 31,000 rounds of various types of 9mm ammunition, including a large amount of +P+ and military M882 rounds. I have no recorded malfunctions of any type.

Only the replacement of the recoil spring assembly in the pistol at 3000-round intervals is in my record book (it was replaced as a reflection of my own personal preventive main-tenance schedule). In my estimation, there is no pistol easier to maintain than the Glock. Every part of the pistol is designed to last through extensive use and parts are interchangeable without fitting. 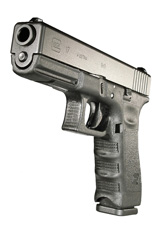 Glock 17
I purchased a Glock 17 last year. I had to have the pistol that started the polymer frame revolution and I also wanted the pistol for use in the Glock Shooting Sports Foundation matches that allow me to compete in another category. Many buy the Glock 17 first and then move to the compact version, the Glock 19. Purchasing the Glock 17 made me realize why the pistol simply swept the law enforcement service pistol market when it was first introduced.

I had flashbacks of what Mike had said years ago when I held the pistol in my hand. No other polymer pistol, in my estimation, can match the gun that started it all, the 9mm Glock 17.

Ammunition Details
The 9mm round has undergone significant design improvements to its performance, since my first purchase in 1994. There are those who disparage the 9mm round and cite instances of poor performance on target, i.e. stopping another human during a lethal-force encounter. There is no perfect handgun cartridge nor one that will reliably stop a human with one shot, save a central nervous system hit: Shot placement is paramount. Use that in combination with good tactics, reliable ammo (in terms of expansion) and the accurate repeat placements of as many rounds as are necessary to end a lethal force encounter, I find the 9mm to be adequate as a personal defense load. I have never felt “under gunned” carrying this caliber.

The year 2008 saw the award of the largest federal law enforcement ammo contract ever. Winchester received FBI’s 9mm and .40 service and training ammunition contract, a contract that supplies not only DOJ agencies but also others who are allowed to “piggy back.” I had the opportunity to travel to the Winchester Ammunition facility shortly after the award and the same ballistic protocols used by the FBI.

FBI subjects candidate ammunition through rigorous testing protocol. Shooting into ballistic gelatin through clothing, wallboard, auto steel and glass determines how a bullet will perform in the myriad circumstances where a law enforcement officer may be required to use their weapon. Awarded contracts are based on a point system. Each event’s scores are totaled at the end of all testing. Winchester Ammunition sub-mitted a “bonded” bullet in both calibers and their exemplary performance resulted in the contract award.

Bullet “bonding” can be done by two methods: a “mechanical” design where the jacket is “locked” to the core by a design feature such as a crimp or cannu-lure; or through a “chemical” process, which involves soldering the core to the jacket either through the application of heat or a bonding agent. Both processes are difficult and while the end result is to ensure jacket/core integrity through barrier penetration, the trick is to make the same bullet accurate and still provide adequate expansion when fired through less difficult barriers such as clothing.

Within the FBI protocol is a test involving auto glass, fired at two compound angles. Auto glass is the single most difficult event in the test series as glass tends to shred bullets and easily separates jacket from core, resulting in inadequate penetration and problematic expansion. Winchester solved this problem through a unique bonding process that resulted in a bullet that met or exceeded FBI accuracy requirements.

Many times a bullet that performs well in a longer (4 inches or longer) barrel displays very different expansion and penetration characteristics in a shorter-barreled weapon. The bullet fired from the Glock 26 through the heavy clothing protocol displays perfect expansion and penetration for several reasons. Glock’s unique polygonal rifling and bore configuration maximizes the bullet/bore gas seal and which results in the maximum obtainable velocity.

The construction of the Winchester’s bonded bullet allows it to work extremely well through a broader range of velocities than conventionally jacketed bullets. This may seem counterintuitive. How can a “tougher” bullet expand at lower velocities? I have been asked not to reveal the engineering details of the bonded bullet design but suffice it to say, it works and works well.

I am reluctant to describe any bullet for any pistol cartridge as an “all-around” projectile. Law enforcement and self-defense situations present such a variety of extremes that finding a bullet design to work well in all of them is difficult.

Having said that and having witnessed the testing of the Winchester bonded bullets in 9mm 147-grain and the .40 in 180 grains, Winchester Ammunition has come as close as any manufacturer to manufacturing a bullet that will perform superbly in virtually any lethal-force encounter.

Final Notes
The Glock 9mm was the first polymer-framed pistol introduced to the law enforcement and shooting community on a wide scale basis. It has been purchased and used by hundreds of thousands of law enforcement officers and millions of civilian shooters in the US and well over four million worldwide. Its robust construction, simplicity of operation, ease of maintenance and “shootability,” coupled with a factory service support system unmatched by any in the firearms industry, has made the Glock 9mm pistol in all configurations, the “best of the best.” 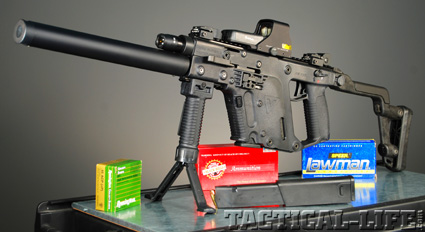