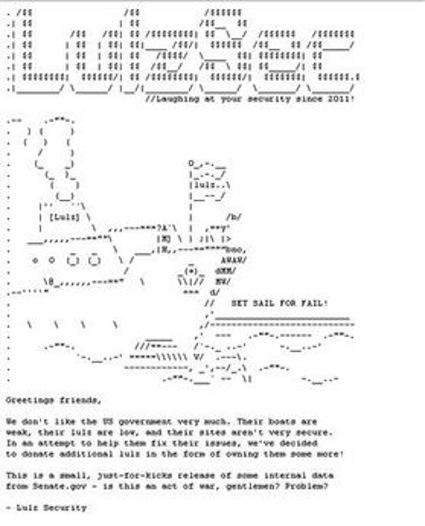 A message from the Lulz Security hacking group regarding the hack of the senate website in seen in a screen grab from the Lulzsecurity.com website taken June 16, 2011. The U.S. Sergeant at Arms Office confirmed on Monday that the Senate’s website had been hacked this past weekend by Lulz Security and that it has ordered a review of all Senate computer sites, REUTERS/Staff

The Senate’s website was hacked over the weekend, leading to a review of all of its websites, in the latest embarrassing breach of security to hit a major U.S.-based institution.

The loosely organized hacker group Lulz Security broke into a public portion of the Senate website but did not reach behind a firewall into a more sensitive portion of the network, Martina Bradford, the deputy Senate sergeant at arms, said on Monday.

Despite the breach, the Sergeant at Arms Office, which provides security for the Senate, said that the breach had not compromised any individual senator’s information.
Lulz announced the hack on Monday.

“We were responding to their allegations. Basically what we’re saying that the server they got into is for public access and is in the public side,” said Bradford.