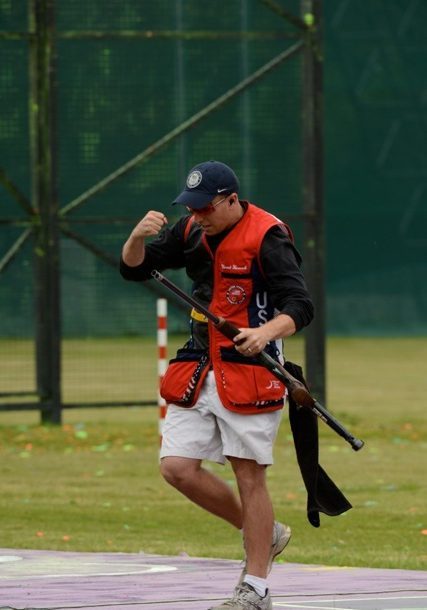 Hancock, 23, a Soldier in the U.S. Army Marksmanship Unit from Eatonton, Ga., eclipsed his own records set at the 2008 Beijing Games for a new qualification record of 123 and total score of 148. He struck gold in China with a qualification score of 121 and total of 145.

Hancock prevailed by two shots over silver medalist Anders Golding (146) of Denmark and by four shots over Qatar’s Nasser Al-Attiya (144), who secured the bronze medal by winning a shoot-off against Russia’s Valeriy Shomin, who is ranked No. 2 in the world.

“Being able to stand up there again and listen to the national anthem again, it’s got to be better,” said Hancock, who also holds the world records for skeet qualification (125) and final (150) scores. “It hasn’t set in fully yet, but going out there and doing it again and taking the opportunity God’s given me to get back out on the field to compete for the gold medal again, there’s just no feeling like it.”

Golding did not feel unfortunate about settling for the silver.

“Hancock is the best competitor you can find,” he said. “He is very, very strong.”

Hancock struggled through a letdown after striking gold in Beijing and considered giving up his beloved sport. He came to London ranked 13th in the world by the International Shotgun Shooting Federation despite finishing fourth at the London 2012 test event, a World Cup stop here in April.

“The expectations helped me get through 2009,” Hancock said. “I won the world championships to the day afterward a year later, and last year, I almost considered quitting. I wasn’t enjoying myself going out there anymore. I didn’t want to go train, and for this sport, you have to be dedicated to your training.”

Since winning the 2009 World Championship in Maribor, Slovenia, Hancock had not won a major title.

“At the end of the year, I knew that I had to change something,” he said. “My wife and I reassessed what we wanted to do. We prayed about it a lot, and we came up with this is my passion. This is what I love to do every single day. So I reset my goals and I wanted to come out here and win another gold medal and just keep going – win as many gold medals as possible.” 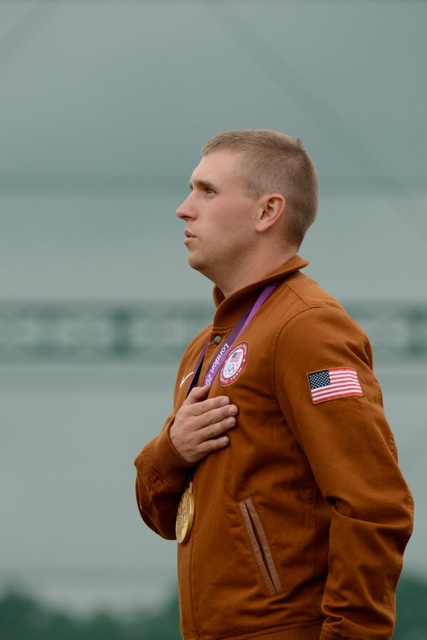 Four-time Olympic shotgun shooter and Team USA shotgun coach Todd Graves said nothing is beyond the realm of possibility for Hancock.

“That’s the greatest thing in the world – two in a row,” Graves said. “He shot lights out, seriously, lights out. I told him out there when I hugged him that he’s the best I’ve ever seen. And I’ve seen a lot.

Having already competed in the Olympics, Hancock said, was the catalyst for his unprecedented success in London.

“This time I knew what to expect,” he said. “I firmly believe that I’m shooting better right now than I ever have in my entire career. A month ago to the day, I won our national championships shooting a 274 out of 275, so being able to come here and shoot a 148 out of 150, I’m already one target behind. so I’ve got some working to do.

“Hey, I leave myself a little room for improvement next time. Maybe I’ll get that 125 and that 150.”

Graves said he thought the bird Hancock missed on Tuesday morning should have broke and the one he missed on Monday “just kind of jumped on him a little bit.”

“As soon as he pulled the trigger, the wind got it and it jumped up a little bit,” Graves said. “Just bad luck. It happens to all of us.”

Hancock missed only one clay pigeon in 75 shots on Monday and another in 75 shots on Tuesday despite windy conditions the first day and shooting the final in constant rain.

“I’ll take any kind of weather,” he said. “Surprisingly, people shot well in this. Usually, when it’s raining and kind of windy, people are going to drop a few targets. But I knew that I wanted to build my lead, not try to protect it when I came out this morning. I just put everything I had into every round and it’s a good thing because people didn’t miss very many targets.”

Graves was not concerned about the conditions.

“It doesn’t affect him a bit,” Graves said. “Wind, rain, it doesn’t matter. The nastier the dad-gum weather probably the better.”

“Hopefully, I’ll build my legacy enough that my kids and the future generations of this sport know me and I can pass on my knowledge to them,” Hancock said.

Hancock will leave the Army in November and open a shooting academy with his father to teach youngsters how to shoot.

“We’re trying to introduce people to this sport that I love so much. It’s given me my life that I have and the family that I know.”

Likewise, Hancock tipped his cap to the U.S. Army for its support. 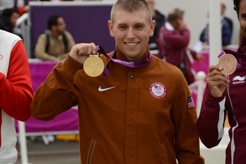 “The Army has given me a sense of dedication to myself, to my country and to my servicemen that I couldn’t have gotten anywhere else,” he said. “They’ve given me the opportunity to perform at this high level. There are so many things they’ve given me that I can’t explain it all because I don’t know how to put it in words.

“They have made me into the man that I am today.”