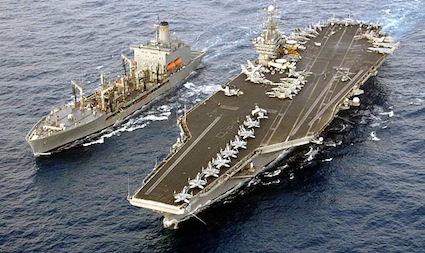 The Pentagon halted the upcoming deployment of a Norfolk-based aircraft carrier Wednesday two days before it was set to ship out – the strongest indication yet that looming budget cuts are forcing the military to change the way it operates.

The Harry S. Truman had cleared all its training and certifications and was gearing up for deployment Friday. But the Navy, faced with a budget crisis that could mean more than $8 billion in cuts this year alone, asked Defense Secretary Leon Panetta to cancel a requirement that the United States keep two carriers in the Persian Gulf, Pentagon officials said. Panetta acquiesced and, in a sharp turnaround for a ship the size of a small city, about 5,000 sailors learned Wednesday afternoon that the deployment had been cancelled.

“The crews are ready; they’ve been working hard; they are very motivated and focused,” Rear Adm. Kevin Sweeney, commander of Carrier Strike Group 10, told reporters. “So there is great disappointment, quite frankly. The crews are ready to go overseas. At the same time, nobody likes to leave their home. Nobody likes to leave their family. But again, they are going to be ready to go when called upon.”

Source: Dianna Cahn for The Virginian-Pilot