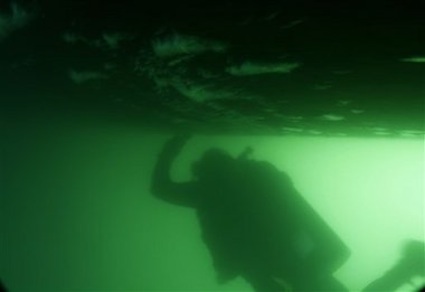 In this Feb. 4, 2011 photo, a U.S. Immigration and Customs Enforcement diver checks the underside of the 498-foot container ship M/V Seaboard Pride in the murky waters of the Port of Miami in Miami. The divers were searching the ship’s hull for so-called “parasitic” devices used to smuggle drugs and potentially, terrorist bombs or weapons. (AP Photo/Wilfredo Lee)

A team of elite divers donned wetsuits and air tanks and descended into the murky waters beneath the 498-foot container ship M/V Seaboard Pride, on a mission in the dark to search for an unusual stowaway: drugs.

The seven members of the U.S. Immigration and Customs Enforcement dive team, formed in 2004 and the only one of its kind in the U.S., were searching for large metal boxes that Latin American cocaine traffickers sometimes weld or clamp onto freighters and even cruise ships to smuggle drugs. The boxes also could be used to hide terrorist bombs or weapons.

Once in this country, the boxes can be opened by divers working with the drug organizations. Sometimes they are detached and later opened at another location. The so-called parasitic devices have been found on vessels in Miami, West Palm Beach and elsewhere containing bricks of cocaine and other illegal drugs — although, so far, no bombs or weapons.

ICE agent Dean Lang, assistant chief of the dive team, said the intense law enforcement focus on drug trafficking through Mexico could push some cocaine smuggling operations to U.S. coasts and ports. Miami in the 1980s was a main avenue for cocaine, and U.S. officials don’t want a return to the violent “cocaine cowboy” days, when rival drug traffickers battled in South Florida for control.

“If you cut off one way for drugs to get in, they will find another way,” Lang said.

Some 70 years later, Civil Air Patrol still has eyes in the sky.

In this Feb. 4, 2011 photo, a U.S. Immigration and Customs Enforcement diver checks…