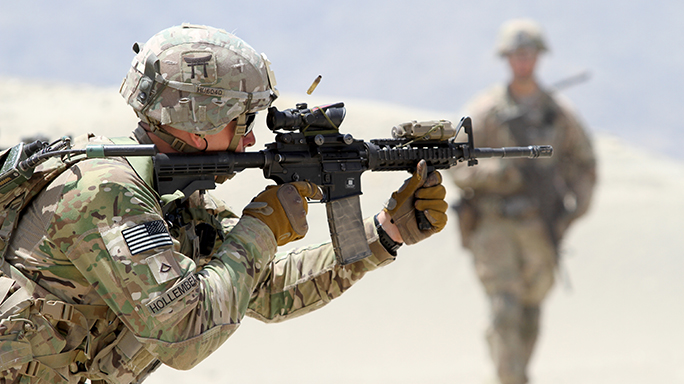 1 of 4
Photo by Army photo by Capt. Charlie Emmons, TAAC-E Public Affairs
A 7.62 Interim Combat Service Rifle Is a Terrible Idea For the US Army
Pfc. Charles Hollembeak, a 101st Airborne Division infantryman, fires an M4 carbine during partnered live-fire range training May 29, 2015, at Tactical Base Gamberi in eastern Afghanistan. 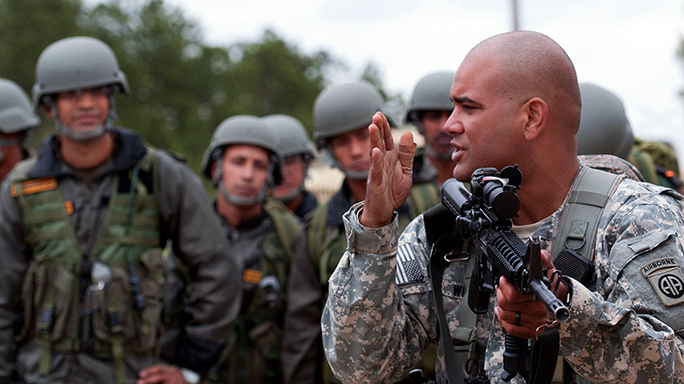 2 of 4
Photo by U.S. Army photo by Sgt. Michael J. MacLeod
A 7.62 Interim Combat Service Rifle Is a Terrible Idea For the US Army
Sgt. 1st Class Garrett Williams, a platoon sergeant with the 82nd Airborne Division’s 1st Brigade Combat Team, demonstrates to Indian Army paratroopers with the 50th Independent Para Brigade how to use an M4 carbine May 4, 2013, at Fort Bragg, N.C. Indian soldiers were familiarized on American weapons as part of Yudh Abhyas 2013, the ninth rendition of an annual training exercise between the armies of the United States and India. It is sponsored by U.S. Army Pacific. 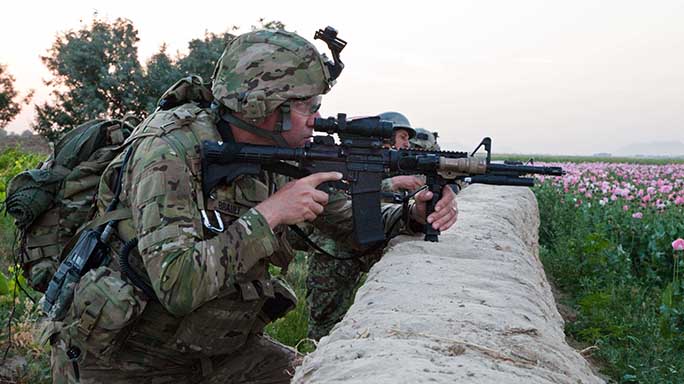 3 of 4
Photo by DoD photo by Spc. Jacob Warren, U.S. Army. (Released)
A 7.62 Interim Combat Service Rifle Is a Terrible Idea For the US Army
A U.S. Army soldier with Charlie Company, 2nd Battalion, 502nd Infantry Regiment, 101st Airborne Division, aims his M4 carbine over a wall while securing an open field in Char Shaka, Kandahar province, Afghanistan, on April 27, 2011. 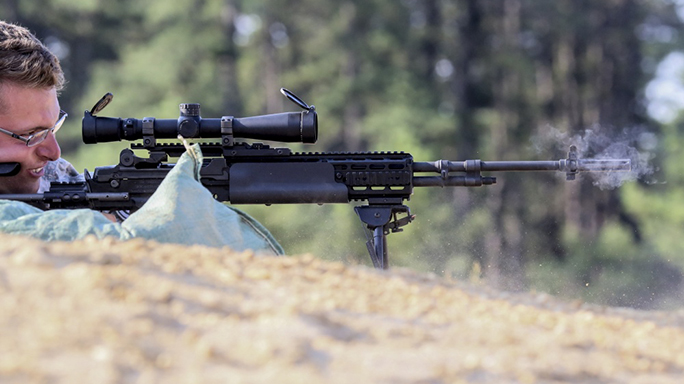 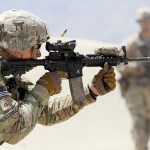 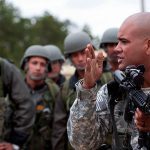 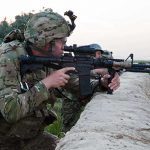 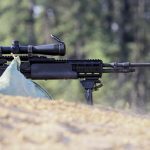 Gen. Mark Milley testified this summer before the Senate Armed Service Committee and expressed the U.S. Army‘s need for a new 7.62 rifle. Dubbed the “Interim Combat Service Rifle,” or ICSR, the proposed weapon would be issued to infantry units for the purposes of defeating enemy body armor.

Body armor, you know, as worn by the Russian military. Concern with an 82nd Airborne trooper’s ability to defeat a Russian infantrymen’s body armor is classic “been out of the game for too long” thinking. This is understandable though. The U.S. has been bogged down with counter-insurgency operations for the past 20 years. Focus has shifted to light infantry for these mission sets.

The Russians on the other hand, their preference is mechanized infantry, armor and artillery. Although concern over the 5.56’s ability to penetrate body armor seems pragmatic, it focuses on the wrong problem sets in America’s next conventional war.

A perfect example is the 2014 war between Russian and Ukraine. An entire Ukrainian mechanized brigade was eliminated in minutes after they were struck by a barrage of GRAD rockets. An entire armored column, gone in just moments.

Regardless of how war with Russia — or China — would actually be fought, the ICSR is a possibility for U.S. troops.

The need for an ICSR has been met with praise, frustration, and hesitation from both soldiers and firearms experts. However, conversation about the utility of an Interim Combat Service Rifle tends to devolve into the tribalism that the gun industry is already prone to. Under these circumstances, it becomes less about the objective utility of a 7.62 combat rifle, or the second and third order of effects behind fielding a new weapons system. Instead it becomes more about the arguments about “this camp versus that camp” and arbitrary listings of technical data.

In order to approach the request for an ICSR in a more pragmatic matter, we reached out to an active duty Special Forces senior noncommissioned officer (John) and a senior U.S. Army operational advisor (Jack). Here are their thoughts:

“Instead of 7.62, we should instead evaluate the ranges that our current carbine already addresses with improved cartridges. The M855a1 is a great round that is (1) excellent at killing people, and (2) can be used at the distances soldiers are already trained to shoot at. Something else to consider is the basic combat load and recoil management for CQB. Urban warfare will be unavoidable in Europe or Korea or wherever the generals are worried about defeating enemy body armor. I get that on paper, in a vacuum, the ICSR seems like a viable solution. However, it’s a waste of money relative to other options out there.

“It’s kind of like the original gray digital camouflage pattern for the ACU. The generals were so impressed with the new design. However, they failed to acknowledge that guys on the ground didn’t want it. In fact, they hated it. But I can imagine them all sitting around a table, addressing some hypothetical argument about infantry platoons being defeated because they had inferior camouflage — ridiculous.”  – John

John brings up valid points regarding adapting solutions — M855a1 — that are already a bit more plug and play friendly. There’s also the one-sided approach that senior army officers take with “solving” battlefield problems. At the strategic-level, generals are accustomed to moving mass and observing the broader impacts of a decision. For this reason, they can become prone to zero sum solutions. “If opposing force X has body armor capable of stopping our small arms munition, we simply change our small arms platform and munition to reacquire overmatch.”

Lessons From the Iraq War

Although a return to conventional war in either the South China Sea or Eastern Europe isn’t improbable, it is a bit outrageous to envision an entrenched U.S. infantry battalion that is incapable of repelling an enemy advance due to the 5.56 munition. If instead that infantry battalion couldn’t repel armored vehicles, that would be a different story. But throughout history men have found particularly resourceful methods for killing each other with the rifle that already exists.

“A study from the Iraq War determined that most distances for sniper engagements in cities were around 500 meters. That distance is the maximum engagement range for the basic carbine rifle issued to infantrymen. In open terrain, it bumped up to about 1,000 meters. We don’t hear about data that measures the distances of engagements. Instead everyone focuses on defeating body armor. OK, let’s just assume that defeating body armor is the only issue and we get a new 7.62 rifle. There is still the incredible logistical issue of fielding ammunition.

“This isn’t as simple as writing a check to manufacturers, this is an in-depth process with a lot of administrative hoops that need to be jumped through. At the end of the day, if an Interim Combat Service Rifle is fielded, it might not be because it’s the most effective solution, but because it’s the one that we can logistically support. But that’s just physical logistics. We’re not even discussing the huge doctrine change that would occur with basic rifle marksmanship training.” – Jack

Jack’s comments about monetary and logistical costs highlight overlooked issues with fielding a 7.62 ICSR. Even if the rifle is fielded, it must be done with changes to both training and operational doctrine.

Joe’s comments addressed the realities under which the Interim Combat Service Rifle would likely see action.

“We’re tiptoeing around saying that we need the ICSR for fighting the Russians, I get it. But spend just one minute looking at how the Russians fight. You quickly realize that Ivan’s going to use RDF (radio direction finding) and drop artillery on your ass.” – Joe

Joe sheds light on the reality that precision strikes and the reduction of collateral damage are the US’s way of war, not the Russian.

The U.S. Military should absolutely field soldiers the equipment that they need to fight the wars of tomorrow. However, we must be wary of equipment that receives more political attention than actual battlefield demand.

RELATED STORY: Don’t Call it a Comeback – Army Said to be Mulling the Return of the 7.62 Battle Rifle

Perhaps, instead of spending money on an “Interim Combat Service Rifle,” the military should instead focus on developing a new end user platform altogether, without the added step in the middle. 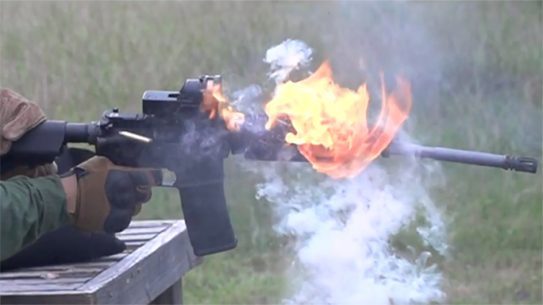 YouTuber Iraqveteran8888 is back with another sick full auto AR-15 meltdown test. In his...