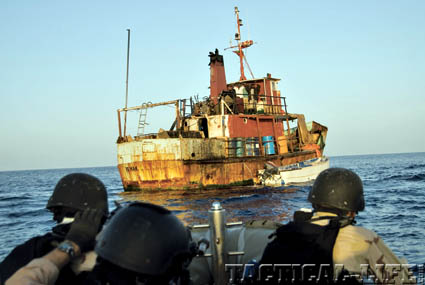 Operators assigned to the U.S. Navy VBSS Unit from the USS Gettysburg approach a pirate mother ship in the Gulf of Aden. DoD photo

The number of ships signalling attacks by Somali pirates has fallen this year to its lowest since 2009, a report from the International Chamber of Commerce International Maritime Bureau (IMB) revealed today, but IMB warns seafarers to remain vigilant in the high-risk waters around Somalia, the Gulf of Aden and the Red Sea. Meanwhile, violent attacks and hijackings are spreading in the Gulf of Guinea.

Worldwide this year, pirates have killed at least six crew and taken 448 seafarers hostage. The IMB Piracy Reporting Centre recorded that 125 vessels were boarded, 24 hijacked and 26 fired upon. In addition, 58 attempted attacks were reported.

The drop in Somali piracy has brought global figures for piracy and armed robbery at sea down to 233 incidents this year – the lowest third quarter total since 2008. In the first nine months of 2012, there were 70 Somali attacks compared with 199 for the corresponding period in 2011. And from July to September, just one ship reported an attempted attack by Somali pirates, compared with 36 incidents in the same three months last year.

Virginia has most registered machine guns in the U.S.

Operators assigned to the U.S. Navy VBSS Unit from the USS Gettysburg approach a…