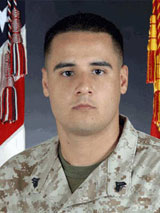 LYON, France – INTERPOL has issued a Red Notice, or international wanted persons notice, for a US Marine wanted by American authorities in connection with the murder of a 20-year-old woman.

The notice for Cesar Armando Laurean-Ramirez, aged 21 from Camp Lejeune in North Carolina, was issued by the General Secretariat in Lyon following a request by the INTERPOL National Central Bureau (NCB) in Washington DC, a component of the US Department of Justice.

Laurean is wanted for his alleged involvement in the murder of Maria Lauterbach, who was pregnant at the time she was killed. A US Marine Corps Lance Corporal assigned to Camp Lejeune, Lauterbach’s charred remains were recovered from a shallow grave in the backyard of Laurean’s North Carolina residence. The victim had been missing since December 14, 2007.

On 12 January, Laurean was charged locally with murder and was also charged federally with unlawful flight to avoid prosecution.

‘The INTERPOL Red Notice is a powerful tool that can assist North Carolina authorities in locating and apprehending Laurean and is placed not only in foreign law enforcement databases and border lookout systems, but in the central database queried by all 186 INTERPOL member countries. We are here to assist the authorities in Onslow County at an international level to locate and bring this fugitive back to North Carolina to stand trial,’ said Martin Renkiewicz, Director of the US NCB and a senior Department of Homeland Security law enforcement official.

Many INTERPOL member countries view a Red Notice as the basis for the provisional arrest of a wanted person with a view to their extradition. It can be requested by any of INTERPOL’s 186 member countries, and is issued by INTERPOL’S General Secretariat in Lyon, France.

Issued in all four INTERPOL official languages – Arabic, English, French and Spanish – a Red Notice remains in effect until the fugitive is captured.

Boston Man Charged: Possession of toxins for weapons use, threat to use weapons of mass destruction