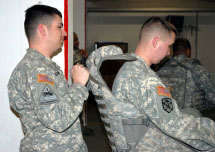 For as long as the Army has used Interceptor Body Armor, Soldiers have complained that it is too heavy, too hot and too cumbersome.

But those complaints may be a thing of the past for Soldiers in U.S. Army Europe’s 2nd Brigade Combat Team, 1st Armored Division. Those Soldiers recently donned the Army’s newest body armor — the Improved Outer Tactical Vest.

“The IOTV is a lot more comfortable because of the mesh lining inside,” said Sgt. Brian Freeman, a tanker with 2nd BCT’s 1st Battalion, 35th Armor. “The waist strap also makes it fit better by redistributing the weight off my shoulders and moving it around my waist.”

Freeman ought to know. He deployed with the 2nd BCT for the first iteration of Operation Iraqi Freedom carrying woodland camouflage pattern IBA.

“We didn’t even get small arms protection insert plates until the fifth month in country,” said Freeman. “I like the mesh lining; it makes it more comfortable.”

The mesh is intended to keep the wearer’s body cooler by improving ventilation.

The IOTV is the Army’s latest evolution of body armor designed to protect the Soldier’s torso area.

According to information released by the Army’s Program Executive Office Soldier, the agency in charge of developing and fielding new equipment, the IOTV meets PEO Soldier’s goals of providing troops the most advanced protective gear available, while also improving comfort and mission effectiveness.

The Army spent a good deal of time asking Soldiers for suggestions and feedback about existing body armor, and then tested new designs based on their responses.

As a result, the IOTV has several advantages over its predecessor. It is three pounds lighter; it provides more coverage in the small of the back; it sits higher around the armpit area; and it sits lower on the torso, said Tony Perez, Team 5 fielding leader for Engineering Solution Products, the contractor selected by the Army to field the IOTV to the 2nd BCT.

Perez noted that the new design addresses one of the biggest complaints about earlier body armor models — that the addition of side SAPI plates forced the Soldier’s arms awkwardly away from his body.

“The side plates on the IOTV are in a better position, decreasing the profile and allowing better arm movement,” Perez said.

Brigade Soldiers who tried on the IOTV called it a welcome improvement.

“The IBA had zero cushioning inside, especially on the shoulders,” Freeman said. “The IOTV fits better and it has a quick release, which makes it better than the IBA.”

The quick-release cable feature allows Soldiers to get out of the IOTV with one pull by disassembling the vest into two parts that fall to the ground. That innovation should help a Soldier get out of the IOTV quickly when needed — such as when a military vehicle rolls over into water — allowing him to escape the submerging vehicle or be pulled more easily to safety. The quick release should also help medics to treat injured or wounded Soldiers quickly.

Pfc. Tony Gonzales, a tank driver for 1-35th Armor, said the IOTV “is a lot better, because it fits better around the body and is more comfortable.”

Pfc. William Fraleigh, an infantryman from the 2nd BCT’s A Company, 1st Battalion, 6th Infantry, conceded that the IOTV allows for better flexibility and movement, and even admitted that the quick-release could prove invaluable if needed during an emergency. But giving up his IBA will be like throwing away a comfortable pair of old shoes, and he was a bit superstitious about the idea.

“It always worked for me in combat and I felt comfortable in it,” said Fraleigh.

“I liked the IBA better, because it is easier to put on than the IOTV. I don’t like the emergency quick-release, because it might get snagged on something during a patrol and the body armor comes undone. You don’t have time to put it back together while patrolling.”

The 2nd BCT continues its preparation for its scheduled spring deployment to Iraq.

For as long as the Army has used Interceptor Body Armor, Soldiers have complained…