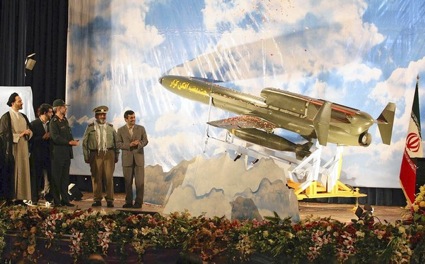 Reporting from Beirut — Iran unveiled an unmanned bomber jet Sunday that will probably fail to tip the region’s strategic balance but suggests Tehran continues to invest in shoring up its conventional weapons capabilities.

President Mahmoud Ahmadinejad, speaking during annual Defense Industry Day ceremonies, described the Karrar drone as “a messenger of honor and human generosity” before also terming it a “messenger of death for the enemies of humanity.”

The audience applauded and praised the prophet Muhammad and his descendants as a sheet covering the olive-green aircraft was removed. A short video showed what was said to be the drone launching into the sky and firing a missile as martial music played.

Ahmadinejad, standing on a stage with Defense Minister Ahmad Vahidi and others in military uniform, said the bomber was meant as a deterrent against potential attacks. “The key message is to prevent any clashes that cause killings,” he said. “We must make efforts to render useless all weapons of the enemy with our defense potential.”

Brig. Gen. Mohammad Alizadeh, managing director of Iran’s Aircraft Manufacturing Industries Co., told state television that the computer-operated Karrar could be adjusted to ranges of up to 180 miles. He said it could carry bombs of varying sizes and ranges that could strike at ships, communications installations, airports, bases and bridges.