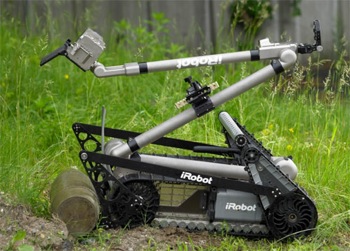 iRobot Corp. announced that it has delivered its 3,000th PackBot tactical mobile robot. First introduced in 2002, the iRobot PackBot allows warfighters and public safety professionals to investigate suspicious objects and other dangerous scenarios from a safe standoff distance.

“While this is an important milestone for iRobot, it also speaks volumes about the growing need for this technology on today’s battlefield,” said Joe Dyer, president of iRobot Government and Industrial Robots. “The investigation and disposal of improvised explosive devices (IEDs), route clearance and reconnaissance all pose significant risks to our troops. These are, in fact, great jobs for a robot.” Dyer continued: “PackBot is battle-tested and is being used in an even wider variety of missions every day. Most importantly, it keeps our troops safe. This drives iRobot to continue enhancing its capabilities and to develop the next generation of robot technology.”

The iRobot PackBot has several modular configurations for a broad range of infantry support and Explosive Ordnance Disposal (EOD) missions. The robot uses commercial off-the-shelf (COTS) cameras and sensors that stream video, audio and data back to the operator. The iRobot PackBot also features a game-style hand controller for faster training and easier operation in the field.

“We at the Robotic Systems Joint Project Office (RSJPO) are proud to be working with iRobot to provide our warfighters with the tools they need to accomplish their missions and return home safely,” stated Lieutenant Colonel David Thompson, project manager, Robotic Systems Joint Project Office. “We appreciate the hard work of all our industry partners in providing the warfighter with these critical tools to extend the capabilities of our warfighters and allow them to better perform dangerous missions.”