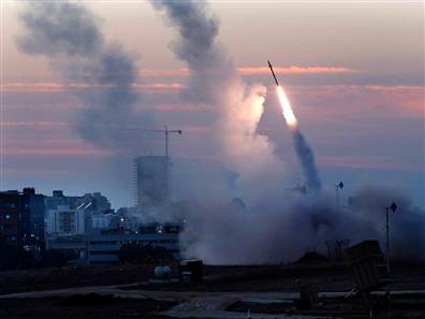 The Israeli Defence Forces and Hamas militants have exchanged fiery tweets throughout the fighting in a separate war to influence public opinion.

Shortly after it launched its campaign Wednesday by killing Hamas’ top military commander Ahmed Jabari, the Israeli military’s media office announced a “widespread campaign on terror sites & operatives in the (hash)Gaza Strip” on its Twitter account.

It then posted a 10-second black-and-white video of the airstrike on its official YouTube page. Google Inc., which owns YouTube, removed the video for a time early Thursday, but reconsidered and restored it.

A tweet from (at)idfspokesperson said: “We recommend that no Hamas operatives, whether low level or senior leaders, show their faces above ground in the days ahead.”

Hamas, under its (at)AlQassamBrigade English-language account, which is largely considered to be the official Twitter account for its military wing, fired back: “Our blessed hands will reach your leaders and soldiers wherever they are (You Opened Hell Gates on Yourselves).”

The Israeli military’s media office Twitter account, which gained more than 50,000 followers in just 24 hours, is just one of various online platforms used to relay real-time information to the public, sometimes even before it is conveyed to reporters.