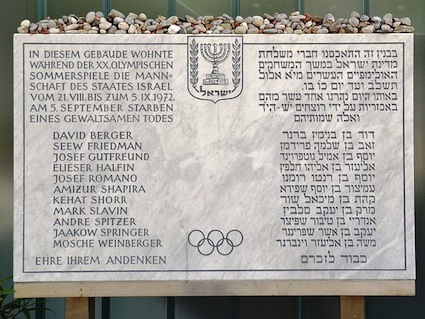 Plaque in front of the Israeli athletes’ quarters commemorating the victims of the Munich massacre. The inscription, in German and en:Hebrew, reads: The team of the State of Israel lived in this building during the 20th Olympic Summer Games from 21 August to 5 September 1972. On 5 September, [list of victims] died a violent death. Honor to their memory. Via Wiki

Forty years ago, during the Munich Summer Olympic Games, terrorists belonging to the Palestinian Black September organization entered the Olympic Village, kidnapped members of the Israeli Olympic team, then killed eleven of them and injured twenty more during a botched German rescue operation.

The Sunday Times reported on Sunday that following the Bulgaria attack, Israel has upped its level of security around its Olympic delegation. The report also said Israel had dispatched to Europe a team of agents from its Mossad foreign intelligence services — the paper says that the operatives Israel has sent to Europe are members of the Mossad’s Bayonet unit — to track down militants planning such an assault attack in conjunction with Lebanon’s Hezbollah militia and the Quds Force, the special operations unit of Iran’s Revolutionary Guards.

AFP quotes Amos Gilad, head of policy at Israel’s Defense Ministry, who dismissed the Sunday Times report as fiction. “Intelligence doesn’t work like that, you don’t suddenly send dozens of agents to chase phantoms,” he told Israel’s army radio. “There has to be precise information and a rigorous collection of information,” he said, describing it as “ant’s work.”