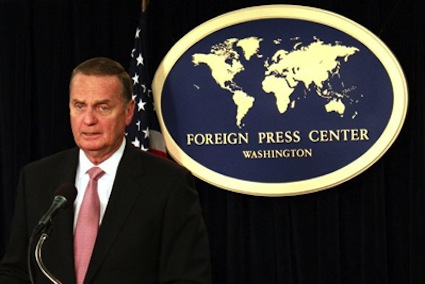 Obama is expected to make this announcement at 1 p.m. today, though James Jones has indicated for a number of weeks that he would be calling it quits before the end of the year, according to various media reports.

Jones will be succeeded by Tom Donilon, a one-time State Department official during the Clinton administration who was recruited by Obama administration to be deputy national security advisor. During Clinton’s presidency Donilon served as assistant secretary of state for public affairs and chief of staff to Madeleine Albright, then secretary of state. Donilon had been considered the natural replacement for Jones by the White House, according to a report in the Los Angeles Times.

Jones is among the names being floated as a successor to Defense Secretary Robert Gates, who already has announced his plans to leave the Pentagon next year, the Times said.

Jones, a retired four-star Marine general, has also been discussed as a possible replacement to Pentagon chief Robert Gates, who has announced his intention to leave the administration next year.

The White House is spinning Jones’ departure as part of an expected turnover of officials – Gates and Obama Chief of Staff Rahm Emanuel, who is leaving to run for mayor of Chicago – as something to be expected after two tough years of an administration dealing with recession, wars in Iraq and Afghanistan and other issues, the Times reports.