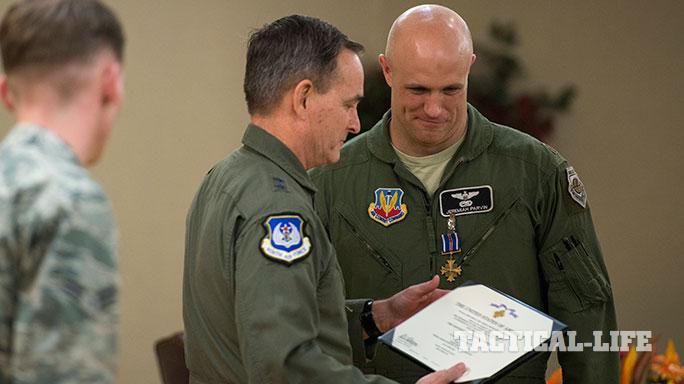 The following is a release from Ceaira Tinsley and the U.S. Air Force:

For one Airman, what seemed to be a standard patrol mission from Bagram Airfield, Afghanistan, Oct. 28, 2008, concluded with him receiving a Distinguished Flying Cross with Valor here Jan. 29.

The actions of Maj. Jeremiah Parvin and his wingman, Capt. Aaron Cavasos, saved the lives of six Marines that day.

Maj. Gen. H. D. Polumbo Jr., the Ninth Air Force commander, presented Parvin with the medal in recognition of his selfless and heroic actions.”This was not an easy situation for major Parvin,” Polumbo said during the ceremony. “He made his way there in an expeditious way, and I will tell you after flying a number of different types of airplanes in the mountains of Afghanistan, it is not an easy environment to fly in. Those of you who have flown in Afghanistan know that it’s significantly challenging … especially when the weather is not good. For me, it was the most challenging environment I have flown in during my Air Force career.”

The DFC is awarded to any officer or enlisted person of the armed forces of the United States who distinguished her or himself in actual combat in support of operations by heroism or extraordinary achievement while participating in an aerial flight.

“That was the beginning of the bravery, the courage, the flight discipline and the real Airmanship that we’re going to recognize today,” he said. “It’s what Airmen do to work their way into the fight in order to put fire down on the ground to support our men and women under fire. This is the bravery that we in the U.S. Air Force identify that it takes to get a Distinguished Flying Cross with Valor.”

Polumbo isn’t the only one who sees Parvin as a hero. For one Marine in the audience, he said he knows his team would have died that day if it wasn’t for Parvin and Cavasos’ bravery.

“It was the first time in my life that I thought to myself, ‘This is it. We’re going to die. We’re not going to make it out of this,'” said U.S. Marine Corps Master Gunnery Sgt. Richard Wells, who was the Marine Special Operations Team chief. “(If it wasn’t for him) I don’t think I’d be doing this interview right now. I’m certain that I wouldn’t have made it out. There is no way that we would have made it all of the way back to the base.”

Although many see Parvin’s actions as heroic, he said any of his counterparts would have done the same thing in that situation.

“Any of the guys we train with on a daily basis, given the same set of circumstances and information would do the exact same thing,” Parvin said. “That’s what we want to train guys to do. Whether it’s here or Davis-Monthan (Air Force Base, Arizona,) we try to train them to a set standard — the same one that we used that day.”

Parvin may have thought the mission was just another day’s work, but seven years later he still remembers all of the accounts of that day.

Then captain Parvin and lieutenant Cavasos, both A-10C Thunderbolt II pilots, were circling their area of responsibility when the air support operations center relayed a call for help.

“We have troops in contact,” chirped over the radio and the pilots raced to the coordinates provided. The pilots made contact with the joint terminal attack controller on the ground, call sign: HALO 11.

Parvin battled poor weather conditions during his 320-mile flight to their location.

As he thumbed through his maps, Parvin realized neither he, nor his wingman, had a map of where they were going. Although the odds were stacked against them, they used their experience to find the location. Upon arrival, Parvin descended below a thick cloud cover and maneuvered through the mountainous terrain to reach the unit in need.

Once overhead, they determined a Marine Special Operations Team was being relentlessly assaulted and the enemy was closing in fast. After nearly two hours of close-quarters combat, the team was in dire need of support and there was no way for ground forces to reach them. There were also a number of Marines who sustained gunshot wounds and needed medical care.

“You get there and there’s this huge excitement and adrenaline rush that you try to tamper down,” Parvin said. “You hear gunshots in the background; you hear screams of urgency in their voices. You could just tell they need help and they needed it now.”

Parvin turned on the A-10C’s overt exterior lights to divert enemy fire toward himself and away from the Marine unit. With the help of the JTAC, he was able to distinguish the friendlies from the enemies and provide close air support. While maneuvering in the mountainous terrain taking heavy surface-to-air fire, Parvin destroyed multiple enemy positions — some within 40 meters of U.S. forces. His actions gave the Marines enough time to retreat to safety.

The hour flight back to Bagram was silent as the exhaustion from the day’s events set in.

Parvin, now the 75th Fighter Squadron director of operations, said it wasn’t until six years later that he realized this was no ordinary mission. It was something more. The ramifications of his actions didn’t occur to him until talking with the Marines he helped that day.

“It was unbelievable to hear the ground guys’ story,” Parvin said. “Once I heard their (account of the events) and listened to the trials and tribulations they went through, I was like, ‘Whoa.’ I knew what we did was really important.”

Now, with three deployments, 280 combat hours and 83 sorties, Parvin has had a lot of diverse experiences throughout his career.

“It feels great (because) we train with all services all the time,” Parvin said. “It doesn’t matter who’s on the ground. We’re going to work with them no matter what and no matter when. That’s our job as A-10 guys to make sure they remain safe at all the times and to provide accurate firepower for them.”

Parvin’s wingman, Cavasos, who is now stationed at Luke AFB, Arizona, was also awarded the DFC with Valor in a ceremony held at Luke AFB Jan. 16. 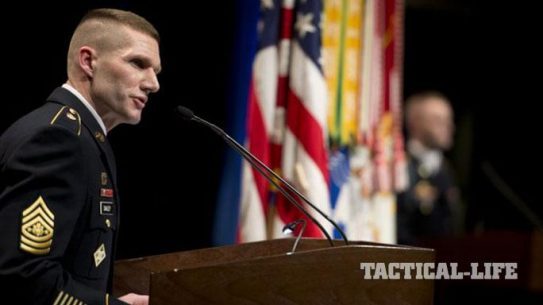 Dailey Sworn In as 15th Sergeant Major of Army

Daniel A. Dailey was sworn in Friday as the 15th sergeant major of the...