An LAPD SWAT Officer narrowly escaped death recently during an intense armed standoff near the USC campus. A ballistic vest and quick reaction by fellow officers likely saved the officer’s life during a shootout that claimed the life of the armed suspect, later identified as Jorge Cerda.

The incident began when police responded to a call of a man firing a rifle into the air in a backyard. Police then found the 36-year old Cerda armed with a rifle, reported mynewsla.com. Police responded by firing tear gas into the home.

Footage then shows an LAPD SWAT Officer first take a round in his chest, which his vest blocked. However, moments later, a round strikes the officer in the neck while in a covering position at the corner of the building. He immediately falls.

Once safely out of the line of fire, the partner continues radioing for aid. Then footage cuts elsewhere to another officer. From an elevated position, the SWAT officer places five well-aimed shots into Cerda. The shots come in rapid succession, putting Cerda down.

This officer impressively acts instinctively. Remember, he’s just found out one of his partners has been wounded by rifle fire. Then he immediately sees the same suspect, armed with a rifle. But the officer quickly puts rounds into the threat. He then makes it very clear, telling the suspect not to move or he will be shot again.

The suspect eventually died at the scene from multiple gunshot wounds, reported KTLA 5. Meanwhile, officials transported the wounded officer to a local hospital for treatment. He was “obviously shaken” but “grateful to be alive,” according to KTLA 5.

The incident shows just how dangerous the job of policing continues to be. It also showcases how highly trained operators watch out for each other, completing the mission under the most difficult of circumstances. 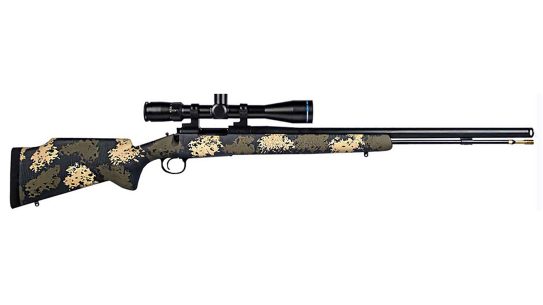 Guaranteeing accuracy between .5 and 1 MOA, the Best of the West Signature Series...