A British judge sent Julian Assange to jail on Tuesday, denying bail to the WikiLeaks founder after Assange vowed to fight efforts to be extradited to Sweden in a sex-crimes investigation.

Despite Assange’s legal troubles, a WikiLeaks spokesman insisted the flow of secret U.S. diplomatic cables would not be affected. He also downplayed efforts to constrict the group’s finances after both Visa and MasterCard cut off key funding methods Tuesday.

“This will not change our operation,” spokesman Kristinn Hrafnsson told The Associated Press. As if to underline the point, WikiLeaks released a dozen new diplomatic cables, its first publication in more than 24 hours, including the details of a NATO defense plan for Poland, Estonia, Latvia and Lithuania that prompted an indignant response from the Russian envoy to the alliance.

Assange turned himself in to Scotland Yard on Tuesday morning, and was sent to the City of Westminster Magistrates’ Court in the early afternoon. He showed no reaction as Judge Howard Riddle denied him bail and sent him to jail until his next extradition hearing on Dec. 14.

U.S. Defense Secretary Robert Gates, visiting with Afghan President Hamid Karzai and U.S. troops in Afghanistan, was pleased to hear that Assange had been arrested.

“That sounds like good news to me,” he said Tuesday. 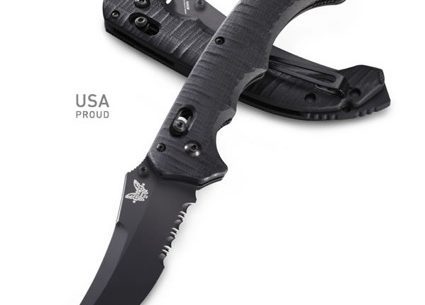 The Benchmade 860 Bedlam is a manual version of the Auto-Bedlam knife.