A Pasco County Sheriff’s Deputy and his trusty K9 Shep teamed up to take down a pair of stolen vehicle suspects in Hudson, Fla. over the weekend. Body camera footage of the encounter can be seen above. Here’s a quick statement from the sheriff’s office describing what went down:

On 2/24/18 K9 Deputy Carmack pursued a stolen Ford Expedition. The vehicle crashed into a telephone pole on Denton Avenue. The driver then fled on foot and K9 Shep was deployed to apprehend him. As Deputy Carmack was attempting to catch K9 Shep and the driver, the passenger exited the vehicle in an attempt to flee. The passenger was quickly detained by Deputy Carmack.

Deputy Carmack made the passenger run with him to locate K9 Shep and the driver. While running Deputy Carmack observed the driver dragging K9 Shep further onto the property, continuing his attempt to flee. The driver gave up when Deputy Carmack caught up with him. He was arrested without further incident.

The SUV driver caught by K9 Shep has been identified as Jacob Montgomery. The passenger who was handcuffed by Deputy Nick Carmack is David Brunton. Both men are facing multiple charges related to the stolen vehicle and fleeing a law enforcement officer and his K9.

“Nick is an unbelievable deputy, like all of our deputies,” Pasco County Sheriff Chris Nocco told Fox 13. “It shows the passion for the deputy, for the K9.”

Nocco told WFLA that Shep is one of five K9s donated to the Pasco County Sheriff’s Office by a citizen who wishes to remain anonymous. The bond between Carmack and K9 Shep is a strong one.

“In all reality, Shep is Nick’s partner. They go to work together every day. They live in the same house together. Those two are very tight,” Sheriff Nocco said. 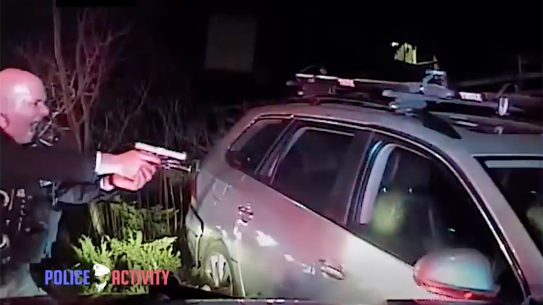